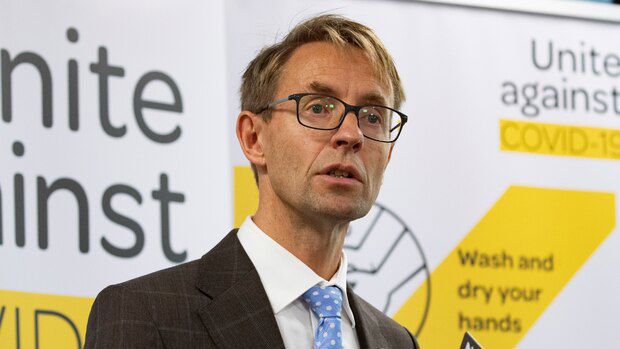 Prime Minister Jacinda Ardern has confirmed Auckland will go into lockdown after four cases of community transmission were confirmed.

Ardern is doing a press conference with director general of health Ashley Bloomfield.

Today had marked 102 days without transmission in the community.

The four confirmed cases are in one family acquired from an unknown source. There was no link to overseas or managed isolation.

Ardern said more than one workplace was involved, and it wasn't just one distinct suburb in Auckland that was likely affected.

"We're asking people in Auckland to stay home to stop the spread.

An Auckland man in his 50s was tested yesterday after having symptoms. He had no history of overseas travel and was tested a second time today. Both tests were positive.

Six other people were in his family, and three of them have tested positive. The other three tested negative.

Close contacts have been isolated for 14 days regardless of their test results. Casual contacts are also being isolated and cannot leave until they test negative.

More questions needed to be answered, Ardern said, including tracing the case to its source.

Without knowing that, a precautionary approach was needed, she said.

"There is no immediate link we have found, as yet to a managed isolation facility, and there is no connection to a high risk person, such as those who work at the border."

Workers at the border are also being tested.

Bloomfield said additional testing will be available around the country to expect the expected increase in demand. People with any symptoms should get tested, he said, whether they are in Auckland or not.

More staff will be placed at testing centres in Auckland, Waitemata and Counties Manukau and they were prepared to test more people.

He said community transmission was inevitable as it was a tricky virus, and it was important now to "stamp it out".

"There are things every New Zealander needs to do."

Those included hand hygiene, coughing into your elbow, staying a home if sick, and seeking advice from doctors or Healthline is you have symptoms.

He encouraged people to wear masks in places where it was hard to be physically distant.

He urged people to use the Covid tracer app.

If contacted, please return the call, he said.

The cases were a "wake up call" against complacency.

"We have done this before and we can do it again."

Bloomfield said it was more relevant than ever to get tested if offered a test.

Ardern said the resurgence plan had been activated, based on what had happened overseas.

Earlier today, Bloomfield said there was one new Covid-19 in managed isolation - a man in his 20s who arrived in New Zealand on July 30 from Melbourne.

He said the man tested negative on day 3 but went on to test positive on day 12.
The man had been in managed isolation at the Grand Millennium and has now been transferred to the Auckland quarantine facility.

There were 22 active cases all being treated in managed isolation facilities after testing detected the illness in returning Kiwis at the border.

It brought the total number of those who have had Covid-19 to 1220.

Bloomfield said work was already under way on planning a Covid-19 immunisation campaign, although a vaccine was yet to be developed.

"We are not sitting idle, we have work under way to look at how we could deliver that vaccine."

Brookhaven Retirement Village in Woolston has reportedly tested eight of its residents and put them in isolation.

And the Village Palms Retirement Community in Shirley had advised family members in a letter that it was in lockdown after residents began displaying symptoms of a respiratory illness. Eight residents were displaying flu-like symptoms.

The Government ramped up its messaging last week despite the nation approached 100 days without community transmission.

Bloomfield confirmed masks could be mandatory in some situations if the country moved up alert levels. And there were also warnings about the likelihood of a "second wave" of infection.

"We all know, we can't afford to be complacent," Bloomfield said in a statement.

"We have seen overseas how quickly the virus can re-emerge and spread in places where it was previously under control, and we need to be prepared to quickly stamp out any future cases in New Zealand. Every person in the team of five million has a role to play in this."

National's deputy leader Gerry Brownlee said on Sunday the change in messaging was "very puzzling" and he called on the Government "come clean" about what it knew.

"People have made a big effort on this and they expect to get all the relative freedom," he said.

"None of us are complacent about it, I believe, it is something that is going to be with the world from this point on."

Likely that the disease is not contained and community transmission is occurring.

• Range of measures that can be applied locally or nationally

• People instructed to stay at home in their bubble other than for essential personal movement.

• Safe recreational activity is allowed in the local area.

• All gatherings cancelled and all public venues closed.

• Businesses closed except for essential services, such as supermarkets, pharmacies, clinics, petrol stations and lifeline utilities.

• Rationing of supplies and requisitioning of facilities possible.

• Range of measures that can be applied locally or nationally.

• People instructed to stay home in their bubble other than for essential personal movement — including to go to work, school if they have to or for local recreation.

• Physical distancing of 2 metres outside home including on public transport, or 1 metre in controlled environments like schools and workplaces.

• Bubbles must stay within their immediate household bubble but can expand this to reconnect with close family/whānau, or bring in caregivers or support isolated people. This extended bubble should remain exclusive.

• Schools between years 1 to 10 and Early Childhood Education centres can safely open but will have limited capacity. Children should learn at home if possible.

• People must work from home unless that is not possible.

• Businesses can open premises, but cannot physically interact with customers.

• Gatherings of up to 10 people are allowed but only for wedding services, funerals and tangihanga. Physical distancing and public health measures must be maintained.

• Inter-regional travel is highly limited to, for example, essential workers, with limited exemptions for others.

• People at high risk of severe illness such as older people and those with existing medical conditions are encouraged to stay at home where possible, and take additional precautions when leaving home. They may choose to work.

The disease is contained, but the risk of community transmission remains. Risk assessment. Household transmission could be occurring. Single or isolated cluster outbreaks.

• People can reconnect with friends and family, and socialise in groups of up to 100, go shopping or travel domestically if following public health guidance.

• No more than 100 people at gatherings, including weddings, birthdays, funerals and tangihanga.

• Businesses can open to the public if following public health guidance including physical distancing and record keeping. Alternative ways of working are encouraged where possible.

• Hospitality businesses must keep groups of customers separated, seated and served by a single person.

• Sport and recreation activities are allowed, subject to conditions on gatherings, record keeping, and physical distancing where practical.

• Public venues such as museums, libraries and pools can open if they comply with public health measures and ensure 1 metre physical distancing and record keeping.

• Event facilities, including cinemas, stadiums, concert venues and casinos can have more than 100 people at a time, provided there are no more than 100 in a defined space, and the groups do not mix.

• Health and disability care services operate as normally as possible.

• It is safe to send your children to schools, early learning services and tertiary education. There will be appropriate measures in place.

• People at higher risk of severe illness from COVID-19, for example those with underlying medical conditions, especially if not well-controlled, and older people, are encouraged to take additional precautions when leaving home. They may work if they agree with their employer that they can do so safely.

The disease is contained in New Zealand. COVID-19 is uncontrolled overseas.

• Isolated household transmission could be occurring in New Zealand.

• Range of measures that can be applied locally or nationally

• Schools and workplaces open, and must operate safely.

• No restrictions on personal movement but people are encouraged to maintain a record of where they have been.

• No restrictions on gatherings but organisers encouraged to maintain records to enable contact tracing.

• Wash and dry your hands, cough into your elbow, don't touch your face.

• No restrictions on domestic transport — avoid public transport or travel if you're sick.

• No restrictions on workplaces or services but they are encouraged to maintain records to enable contact tracing.