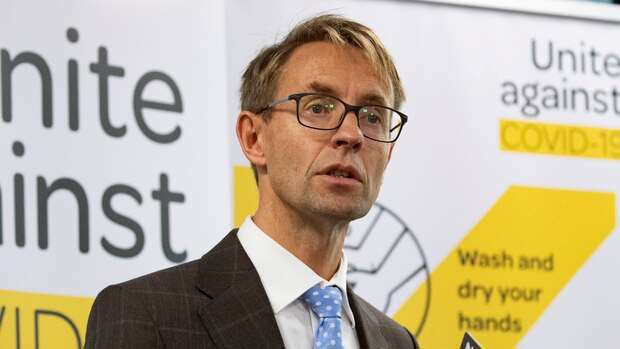 Bloomfield said two of the new cases are linked to churches and two are household contacts.

The country now has 129 active cases, 19 of which are in managed isolation or quarantine facilities.

The facilities are housing 160 people linked to the cluster and 2446 close contacts had been identified with 2390 contacted.

Eight people are in hospital and three are in intensive care - including one which is still under investigation.

There were 4434 tests completed yesterday.

Bloomfield said he expected to see lower testing days over the weekend.

He said 1.8 million people had now downloaded the Covid Tracer app - 45 per cent of the population aged over 15.

Hipkins said he will be setting out the rules for wearing masks on public transport on Thursday.

While the country is at alert level 2 and higher, the Government is making it compulsory for people travelling on buses, planes, trains, ferries and even Ubers to wear face masks, the Prime Minister announced yesterday.

The move comes after several people became unwell from a bus journey and new research shows the benefits of people wearing face coverings.

Ardern also urged Aucklanders to wear face masks while they are out in public as she has been since the city moved into level 3 almost two weeks ago.

Bloomfield said today his ministry was working through advice from the World Health Organization on masks in schools for over 12s, but said it was particularly focused on countries where there was a lot of community transmission.

Hipkins said he had not seen evidence that making masks mandatory in schools would greatly reduce the risk but everything was continually being reviewed.

Hipkins said the Covid defence systems had "gone into overdrive" over the last two weeks, under extraordinary pressure, and all New Zealanders owe them a huge gratitude.

He personally thanked those involved in the dedicated workforce.

This week they would shift to an "aggressively targeted approach" with a 70,000 test target over the next seven days, including border workers, MIQ guests and staff and some asymptomatic people in specific areas - in particular South Auckland.

There is work underway to deploy six mobile testing units to scope testing sites, such as churches, which would be active for two to three days at a time. They would be targeted for Maori and Pasifika communities, he said.

"It's challenging to keep up this pace but it is doable."

DHBs were starting to report signs of testing fatigue amongst the public and Hipkins urged people to not relax now and continue to seek tests if needed.

He thanked all New Zealanders, but in particular Aucklanders, for their efforts to stamp out the virus.

"It's hard but hugely appreciated."

Bloomfield said he suspected the first wave of testing got to most people with symptoms but the next wave would focus on testing asymptomatic as well as those with cold and flu symptoms.

Moving out of lockdown

Auckland will move into level 2 like the rest of the country at midnight on Sunday except with stricter rules.

Auckland workplaces and schools can open under normal level 2 conditions, but bars and restaurants will have to keep groups to no more than 10 people and abide by the "seated, separated, single server". Dance floors at clubs will have to remain empty.

Auckland parties and church gatherings will also be restricted to 10 people, but funerals and tangi will be allowed up to 50 people.

The rest of the country will continue under normal level 2 rules, including the 100-person limit on gatherings.

These alert level settings will remain in place for at least one week, with Cabinet reviewing them on Sunday, September 6.

It emerged today that an office worker in a downtown Auckland office block has tested positive for Covid-19.

Tenants in the Crombie Lockwood tower, in Queen St, have been sent an email confirming the news someone in their building had tested positive for the virus.

"Last night, one of our tenants was advised that a member of their staff from the 191 Queen Street office has tested positive for Covid-19," it said.

"The staff member and all members of their household are now in quarantine under the care of [the] Auckland Regional Public Health."

The email was sent to the Herald by a tenant in the building.

Tenants were told that the staffer had last been in the building last week on Monday, August 17. They only went into their office, tenants were told.

"ARPH has advised that the test results will determine how far back they need to contact-trace."

The building is on an after hours-only access schedule.

"So even with an access card, this person wouldn't have been able to go anywhere else than his/her office and floor."

The email goes on to say that the person involved is regarded "full floor tenancy" so it would be very unlikely they would have been in contact with anyone else in the building.

Yesterday there were still three cases under investigation yesterday - including the Rydges maintenance worker - with officials unable to make an epidemiological link.

And 10 people were in hospital, including two people in intensive care in Middlemore.

About 2,300 close contacts of cases had been identified, of which 2,249 had been contacted by yesterday morning and all were self-isolating.