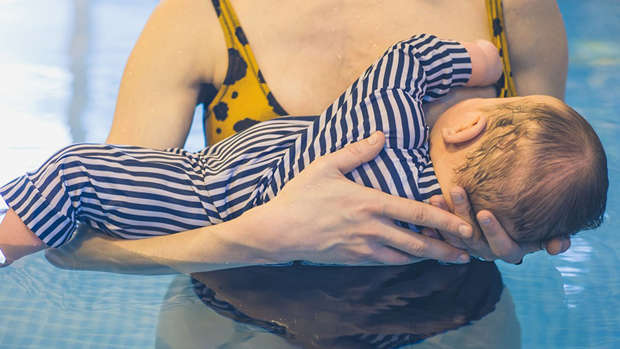 Breastfeeding in public is something that worries many mothers, but babies need to be fed.

However, one mum was recently criticised for attempting to feed her hungry baby while at a public swimming pool.

Taking to social media to share her experience, the furious Aussie mum sparked a heated debate after revealing she was asked to leave the pool while breastfeeding her 10-month-old baby, as she posed a "hygiene" risk to other swimmers.

In the same way that food and drink are not allowed in the pool, the mother-of-two was told by lifeguards at the Lakeside Leisure Centre near Newcastle that she had to stop breastfeeding.

Posting on a local parenting Facebook group, the mum wrote: "Yesterday was the second time the lifeguards at the pool I take my son to for swimming asked me to get out of the water because I was breastfeeding."

"The reasons they gave me were: no food and drink allowed in the pool, getting milk in the water is a hygiene risk and my baby might vomit in the water." "The lifeguard’s reasons are pathetic, they show a clear lack of understanding of basic human biology and of the law. It’s ignorance on their part," she said.

"The first time I was so incredibly embarrassed and ashamed that it happened to me, I’ve only ever heard of it happening to other people."

"The second time I was angry, I was more confident in myself as a mother and of my legal rights to breastfeed anywhere, any time, including in a public pool if I choose."

But not everyone agreed with the mother - who was also trying to supervise her three-year-old son at the same time.

"I'm sorry but in the pool??? There is a time and place for everything and feeding in the pool is not ok," wrote one man.

"As much as I support breastfeeding in public, we don't eat food while we are in the pool," added another.

A third pointed out: "Leaving aside the issue of breastfeeding in the pool, how can she possibly supervise her 3 year old, especially if the child got into difficulty, while having a baby attached to her breast?"

READ MORE:
• 'How To Dad' shares his thoughts on breastfeeding in public - and we couldn't agree more!
• Dad goes viral after sharing powerful photos of him 'breastfeeding' his newborn daughter

"She's breastFEEDING, aka baby is ingesting FOOD, food is not allowed in pools so why would she be any different? As a mum I am all for breastfeeding but come on! Get out, feed your kid then get back in the pool," said a mother.

"I don't want to swim in your baby's vomit. Or you breastmilk, but if you would like to feed your baby away from the pool deck, I'm happy," someone else posted.

"I think the Leisure Pool has a point," said another. "I can't eat a sandwich in the pool, it's no different."

While other parents sided with the mother, saying breastfeeding was far less of a concern than children peeing in the pool.

"Oh my god, how many people wee in the local pools. Or toddlers/babies pool in their swim nappies - or when people snort up water and huge amounts of snot comes out of their nose and lands in the pool. I'd much rather breastmilk in the pools, it's good for your skin. Breastmilk is 80% water anyway. NORMALISE breastfeeding. I would feed my baby in the pool too," wrote one mum.

"They may as well ban all breastfeeding mothers from swimming if they do not want milk in the water, I know I can let down at any given time and I cannot control if I wanted to!! It is as unpredictable as [my baby] pooping in the water and I'm sure those swimming nappies do not hold all the poop in place. Guess they should ban babies as well. As a society we continue to pass judgement. It was causing absolutely no harm to anyone. The pool staff were just blatantly disrespectful," added an angry parent.