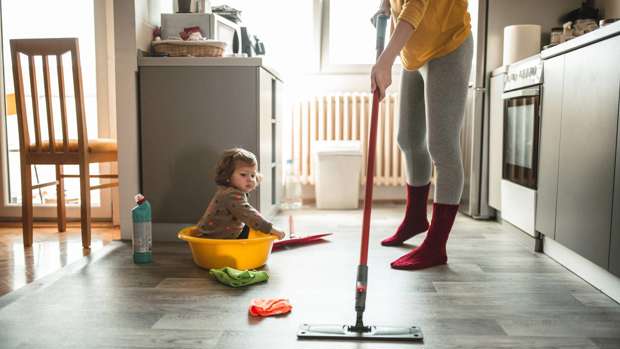 Most couples share the load when it comes to cleaning the house - but one UK mum says it's her job, not her husband's.

Saunders lives with Preston, also 24, and their two sons Elijah, 2, and Finley, 6 months, in Somerset in England. And she says she's perfectly happy being in charge of keeping their home spotless.

"When people hear my partner James hasn't cleaned the loo in nearly two years, they're stunned. But I don't care. It's not his job. In fact, housework in general isn't his job. I do everything, getting up at 7am and stopping at 1am, when I fall exhausted into bed," she told the outlet.

"I cook our boys' food, clean, dust, tidy and vacuum. James, who works as a steeplejack, doesn't need to do anything. I don't think it's archaic or unfeminist, like some people have claimed, I just think it's the best way of doing things — and only fair at the moment as he's the breadwinner and he's exhausted when he gets home."

When the couple unexpectedly fell pregnant seven months after getting together in 2017, they decided together that Saunders would be a stay-at-home mum and leave her full-time bar job.

She said most of her friends with kids do the same, or only work part-time.

"My schedule varies but is pretty relentless, especially as I'm studying for an Open University degree in law.

"I love it but it's a lot of reading, which I usually do at around 11pm, after James and the kids are in bed. I eventually want to become a lawyer but nothing is set in stone."

But Saunders said if she does achieve her dream, she'll still do most of the housework.

"I spend most days in a constant whirl of cleaning, putting toys away and doing laundry. It's hard-going but I really want a clean house for James to get back to around 5pm."

While he doesn't help tidy up, he does cook dinner.

Saunders said it annoys her when people call her old-fashioned because she enjoys what she does.

"It's my choice. I can still do all this and be a feminist."

And her partner is more than happy with how things work in their household.

"If only she could learn how to cook too, ha! I'd be living the dream."