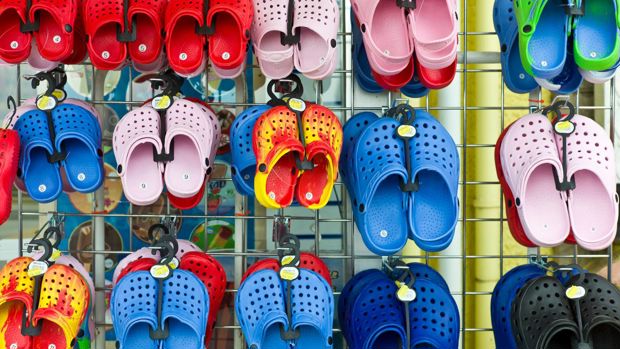 My first thought was: "if my eyes had an undo button I would be pressing it now". Some things cannot be unseen, however, and I fear the new Balenciaga collaboration with cult beach-friendly footwear Crocs may be one of those things.

When I think Crocs I think of small children playing at the beach or the awkward period after they first came out when many an adventurous fashionista tested out whether they could in fact be worn unironically. It turned out they could not. Somehow, in spite of this, Crocs have prevailed and live on as a divisive footwear trend that many of us love to buy for our kids but would never be caught dead in ourselves. Not being particularly fashion-forward myself, however, I must be missing something crucial as not only do Crocs prevail but one could even argue that they are having a renaissance, enjoying a heyday and forcing sceptic like me to eat my sarcastic words. They also continue to evolve. You can get light-up ones, sandals, slides and, now, stilettos.

High-end fashion house Balenciaga has given fans the first look at their Spring 2022 collection and it includes the controversial footwear in question. Combining the ugly-yet-comfortable Croc with the agony of a stiletto heel seems like a match made in hell, not to mention the fact that CNN speculates that the designer shoes could sell for as much as US$1,000. The very best thing about the Balenciaga-Croc-en stein reveal is the wonderful response from the magical land of Twitter. As always the Twitterverse has leapt onto this unique offering with verve, vim and venom.

When a Twitter user posted photos of the Croc-lettos and asked: "Balenciaga Crocs are here because hey why not?" The virtual floodgates opened.

"I can think of many reasons. Many many," replied one baffled Twitter user.

"Perhaps these have been created as an illustration for 'ugly'," queried another.

"Why. WHYYYYYY?" Begged yet another confused Twitter user searching for answers where there were none to be found. In addition, there were many Schitts Creek memes shared to convey dismay at the fashion revelation.

This isn't the first time France-based fashion house Balenciaga has teamed up with the cult footwear brand. In 2017 they teamed up to release a line of US$850 platform clogs that reportedly sold out before even being available in stores. Will the same thing happen with the Croc-lettos? Possibly, although there is always the happy thought that the whole thing was just a bad dream.