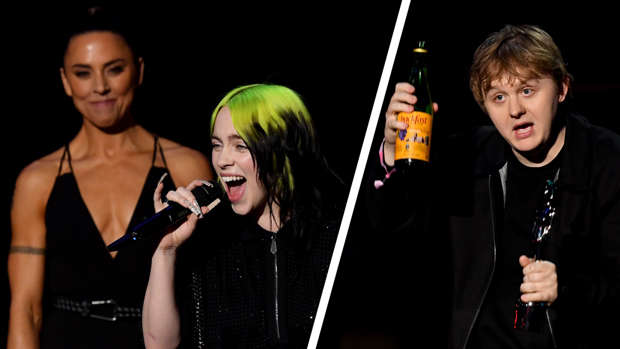 Lewis Capaldi was the big winner at the BRITs 2020.

The Scottish singer scooped New Artist of the Year and Song of the Year for Someone You Loved.

Lewis' first speech was muted by ITV as the Grace hitmaker speedily said: "Thank you very f***ing much see you in a bit goodnight."

He then took aim at his ex-girlfriend, Paige Turley - who is currently on Love Island - whilst accepting his second accolade of the night as he reiterated that the song is actually about his late grandmother.

He said: "My name is Lewis. Thanks very f***ing much. Contrary to many people thinking it’s about my ex-girlfriend who you can now see every night on Love Island, it’s actually about my grandmother who sadly passed away a few years ago."

The 23-year-old star - who had clearly hit the booze hard - then thanked his grandmother for "dying", before apologising.

He said: "I hope to God ITV don’t contact her to be on a dating show.

"It's the best year of my life. Thanks to my mum and dad for making love and thanks to my grandmother for dying. Sorry. See you later."

The Don't Call Me Up hitmaker dedicated her win to her musician parents Neneh Cherry and Massive Attack's Cameron McVey.

Elsewhere, Foals were named Group of The Year, beating Bring Me The Horizon, Coldplay, D-Block Europe and Bastille.

Billie burst into tears and admitted she has felt "very hated recently" as she won the International Female Solo Artist BRIT Award.

The 18-year-old pop superstar - who also gave the debut performance of her No Time To Die Bond theme with Hans Zimmer, Johnny Marr and her brother Finneas O'Connell at the ceremony at The O2 - was overcome with emotion when she accepted the statuette from Spice Girl Melanie C and addressed the nasty comments she has been receiving on social media, which she said have "ruined" her life.

"When I was on the stage and I saw you guys and was smiling at you, it genuinely made me want to cry and I want to cry right now - so thank you."

She began her speech: "Oh my god. Thank you Sporty. Oh Jeez.

"Before I saying anything ... Lizzo, Ariana, Lana, Camila, you are the only reason I exit so thank you  - you deserve this."

Billie then "stuttered" and said "Lizzo", and the Truth Hurts hitmaker jumped up out of her seat to shout: "I love you".

The US singer then continued: "London has always felt like a second home to me."

The Grammy-winner had earlier vowed to stop reading comments made about her on Instagram, Twitter and other online platforms and slammed "cancel culture" as completely "insane".

The ceremony saw a show-stopping medley from Lizzo, Harry Styles performed Falling, Dave politicised his rendition of Black and the most-anticipated performance of the night was Billie’s live debut of her 'No Time To Die' Bond theme with Hans Zimmer, Johnny Marr and her brother Finneas O'Connell.

The 40th BRIT Awards - which was hosted Jack Whitehall - drew to a close with Sir Rod Stewart reuniting with his Faces bandmates Ronnie Wood and Kenney Jones.

The last time they performed at the ceremony was in 1993, with Bill Wyman and the late Ian McLagan, when Rod was honoured with the Outstanding Contribution prize.