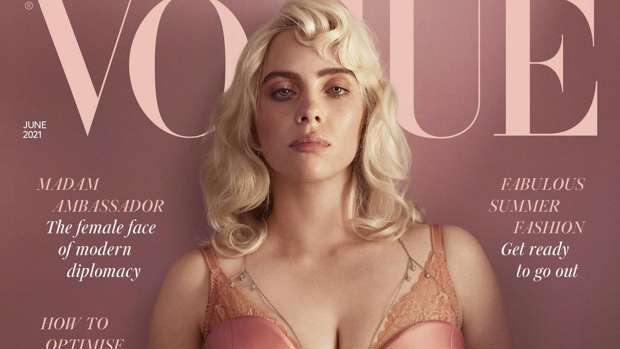 Billie Eilish has posed in a custom corset on the cover of British Vogue and the garment sends a powerful message to her trolls.

The Grammy award-winning singer is set to release her second album Happier Than Ever in July and wears custom corsets designed by Burberry, Mugler and Alexander McQueen for the magazine shoot.

Eilish has been vocal about her critics in the past after she experienced body shaming from trolls, and her corset is a powerful statement about body positivity.

The 19-year-old singer requested a classic pin-up makeover for the cover and chose to wear a corset partly because she hates her stomach and wanted to take the power back from her negative thoughts.

She told journalist Laura Snapes: "'If you're about body positivity, why would you wear a corset? Why wouldn't you show your actual body?'"

British Vogue says the singer worked closely with style director Dena Giannini for the look and Eilish remains true to who she is.

The singer's brand new blonde hairstyle caused a social media frenzy when she debuted the new look on Instagram, and the post became the fastest post to reach one million likes - in just six minutes.

"It's about taking that power back, showing it off and not taking advantage with it," she shares in the cover story.

The popstar makes it clear she is in charge of her creative choices: "I'm not letting myself be owned anymore."