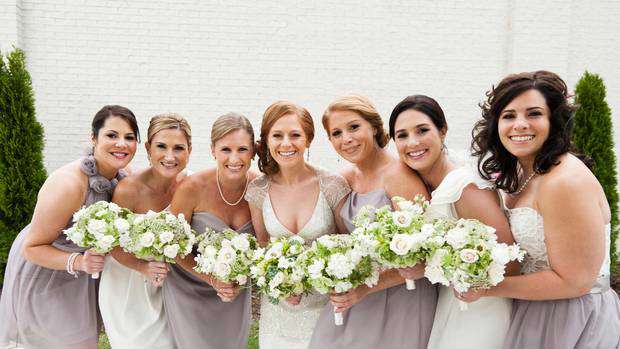 A bride has been slammed online after confessing to having her plus-sized bridesmaid photoshopped slimmer in wedding photos.

The bride, believed to be from the US, took to Reddit to reveal she was not satisfied with the way her bridesmaid *Heather (name has been changed) looked in her photos.

She then went and asked her wedding photographer to alter the pictures to slim her down, she explained on Reddit's Am I The A****** forum.

She admitted that she knew what she had done was "shallow", but insisted she felt it wasn't "body-shaming".

Instead, the bride claimed she only edited the photos for her personal album because she felt her friend's dress was not flattering in the images.

However, Reddit users disagreed, stating that editing for her personal photos was just as bad, if not worse, and showed the bride was "fatphobic".

"I got married a little over six months ago. I gave each of my bridesmaids a group picture of us, these were portrait style pictures. For my personal album, there were many full-body shots," the bride explained.

"My friend "Heather" is a bigger girl. In some of these pictures, the bridesmaids dress created a very unflattering silhouette. I asked my photographer to edit her. This was for my personal photos only, I can not emphasize this enough."

The bride explained that what she had done came out on a girls' night with Heather and two other friends while looking at the bride's wedding album.

One of the friends made a point to tell Heather she looked "damn good" in the photos and pointed them out to her.

"Heather got really offended and asked me what I did to the photos. I got mad at my other friend "Stacy" because she had no reason to point out that she thought Heather "looked good". I feel as if that is body shaming in and of itself.

"I told Heather that I had the photos edited for my personal album, and she got angry. We ended up getting into a shouting match, which I thought was totally unnecessary," she went on.

"I told her to be more secure, and pointed out that it was Stacy that was actually body-shaming her. She drew her attention to the photos in the first place."

Since then, the fight has moved to social media, where "Heather" discussed the bride's behaviour publicly.

"Heather has been trying to shake me on social media and all of my friends are taking her side," the bride continued her Reddit post.

"These photos were edited for my personal album, does that make me an a******? I feel like Stacy shouldn't have drawn her attention to them."

A small group of people agreed with the bride, however many slammed her for being a bad friend and labelled her as "shallow".

"I almost think it makes it worse that it was for a personal album? Maybe it's not worse, but it's certainly not better. Like you are actually so offended by the way your friend's body looks that you have to edit it in order to be able to look at it at home by yourself," one noted.

"I actually can't believe how awful this person is," they added.

"The fact that this was supposed to be for your own 'personal' viewing actually makes it worse, not better," another agreed.

"It means you are so distracted by the way your friend's body looked that you wouldn't be able to enjoy looking at your own wedding photos," they added.

One person felt Heather would be right to end the friendship over the act.

"She literally changed pictures of her friend because the way her friend looks isn't good enough for her. It's a pretty big sign. It should be the end of their friendship," they said.

"You edited pics because your bridesmaid (supposed to be your best/closest friends) was too fat. That's the baseline here," one said.

"Then you deflected and blamed someone else for making a comment, who didn't know that you altered them? Generally, I'd say that being shallow (something you admitted) and then blaming others and getting defensive about being shallow qualifies you as the AH," they added.