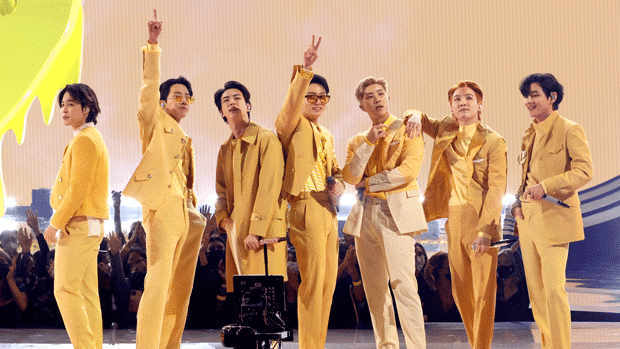 BTS have all individually joined Instagram have already broken records.

The Grammy-nominated K-pop group already had a shared account for the band but they have now set up their own individual pages, days after announcing plans for an "extended break".

Less than a day after creating their accounts on the platform, the band members have attracted millions of followers.

At the time of writing, J-Hope and RM have both acquired 18.6 million followers, trailing narrowly behind Suga with 18.7 million and Jin with 18.9 million. Jimin is being followed by more than 19.4 million users, while Jungkook has attracted 20 million people and V has a staggering 20.9 million followers.

In fact, V broke several records including becoming the fastest person to reach 1 million in just 45 minutes - the record was previously held by Angelina Jolie at 1 hour.

He also became the fastest person ever to reach 10 million followers and broke Billie Eilish’s record for the fastest celebrity to reach 1 million likes on a post, in just 4 minutes.

Despite this, they all follow just seven accounts - each other and the main account for the band.

The Butter hitmakers announced over the weekend they would be taking an "extended period of rest".

A statement from their record label Big Hit Music said: "We would like to inform you that BTS is planning to take a second official extended period of rest since their first in 2019, after they complete their official scheduled events of ‘BTS PERMISSION TO DANCE ON STAGE – LA’ and the ’2021 Jingle Ball Tour'.

"BTS stayed active in order to engage with fans in 2020 and 2021 amidst the COVID-19 situation, and achieved dazzling results to cement themselves as top global artists."

The label reassured fans that it will be a "short" break over the festive season.

It continued: "This period of rest will provide the members of BTS who have tirelessly committed themselves to their activities, a chance to get re-inspired and recharge with creative energy.

"It will also be the first time for them since their debut to spend the holiday season with their families. We kindly ask once again that you show consideration for their need to enjoy ordinary and free, everyday lives while solely concentrating on themselves, albeit for a short while, during their period of rest."

And it was also teased that the My Universe hitmakers are going to be preparing their next album.

The statement added: "BTS will be focusing on preparing for the concert and release of the new album that will mark the beginning of a 'new chapter.' They are preparing for a concert this coming March to connect and communicate with the fans in-person in Seoul.

"We would like to extend our deepest gratitude to all the fans who continue to cheer for BTS and they will return as their best, healthiest selves after recharging so they can return all the love from the fans. Thank you."

The group previously took a break in August 2019 but returned to work just a month later.