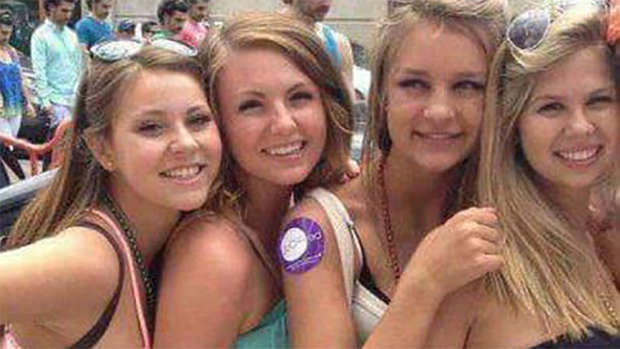 Posing in the sun for a quick photo, these four women look like regular tourists enjoying their holiday - but all is not what it seems.

The photo, which was shared on Imgur, has left the internet scratching its head, because something about it isn't quite right, the Daily Mail reports.

Imgur user what047 shared the snap online with the caption: "It took me forever to find what was wrong here..." - and it seems the rest of the web is struggling, too. While the main focus of the photo is clearly the four women - it's what's in the background that's amiss. If you take a closer look, every single man strolling past in the background has the exact same head.

Indeed, someone has used their Photoshop skills to superimpose one man's head onto all nine bodies.

Each figure sports a curly head of hair with a neon headband in the snap - and internet users have been left shocked by how easy it is to miss the glaring Photoshop job.

People took to the comments section to discuss the photo, which has been viewed nearly 500,000 times. Plenty of people said they were so distracted by the lady on the left's derriere that they failed to spot the clones in the background.

The optical illusion comes after a photo, which was posted to Imgur, appeared to show a naked man lounging with his legs apart on a boat with his girlfriend.

But look again and it becomes clear that the photo is entirely innocent. It's the woman's legs causing the confusion, as they're draped across her partner's lap, concealing his shorts.

The snap was shared online by someone who spotted the comical effect of a friend's new profile picture, and it's been viewed over a million times already. "At first, in the thumbnail, I thought he was totally naked. then I realised that was his hand," one person wrote on Imgur.