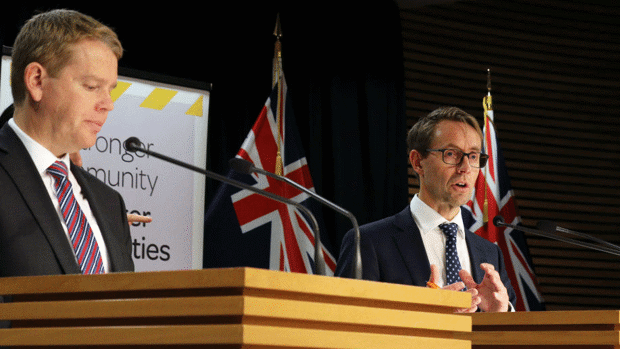 There are 147 new community cases today and a man isolating at home with Covid in Auckland has died suddenly, the Ministry of Health says.

Of today's cases, 131 are in Auckland, 14 in Waikato and two are in Northland.

The Ministry says someone isolating at home with Covid has died suddenly in the Auckland suburb of Glen Eden.

Director general of Health Ashley Bloomfield said the death would be investigated.

The cause of his death will be determined by the coroner, including whether it may have been Covid-19 related.

Foster said officials told the council it wasn't an unusual detection and is likely from cases in MIQ.

There were positive wastewater detections in samples collected from Stratford in Taranaki on November 6 and 7, but Covid-19 was not detected in samples taken on November 8. Further samples will be collected next week.

Further testing in Gisborne and Napier, where positive wastewater detections had been found recently, had not register more positive detections.

Education Minister Chris Hipkins said New Zealand was nearing the stage when it could re-open but that would be done carefully. He said school students in Years 9 and 10 could return to school from November 17. Years 1-8 would return part-time from the same date.

Schools and kura could decide what worked best for their communities in structuring the return to school.

He said public health advice supported the return of schools, but there would be masks for Years 4 and up, and ventilation requirements.

Hipkins said Auckland was at 90 per cent vaccination rates for the first dose and that afforded some protection, as would the mandate on school staff getting vaccinated, which kicked in next week.

Hipkins said the requirements on schools relating to the changes in the curriculum would be eased by delaying the new curriculum introductions.

Asked why primary school students would be part-time, Hipkins said that was based on public health advice. There were no hard and fast rules on how schools should do that, and he was aware some parents were nervous about sending children back to school.

"I've spent several months at home with my own children during Covid-19 restrictions and it is hard-going, and that is only a fraction of what Auckland parents have had to deal with"

Bloomfield said Covid modelling had initially forecast 200 cases a day by the end of this week - and last week's case numbers were on track with that modelling. H

He said hospitalisations had been higher and were due to hit 150 but there was capacity in Auckland for it.

"Anyone who needs care for any reason, do not delay in seeking it. It is safe."

There are now 21 residents and four staff members of Edmonton Meadows Care Home in Henderson who have tested positive for Covid-19.

Seven of the Covid-19 positive residents are receiving appropriate ward-level care at Auckland hospitals. There has been no increase in numbers over the last 24 hours.

A second resident at the Rosaria Rest Home has also tested positive.

Bloomfield said the Northland cases were both in the same household in Dargaville - one was a child under one. "Vaccination is the best way to protect our tamariki."

People in Dargaville were urged to get tested as soon as possible if they had symptoms of Covid-19.

For the Waikato's 14 cases today, 10 are from Ōtorohanga – including six people in one household who are known contacts of cases - three from Hamilton and one from Ngāruawāhia. There are seven pop-up and dedicated testing sites operating across Waikato today in Hamilton, Ngāruawāhia, Huntly, Ōtorohanga, Te Awamutu, and Te Kuiti.

All of the 81 people with Covid-19 in hospital are in Auckland. Almost half (40), were unvaccinated, 25 were partially vaccinated, 10 were fully vaccinated and six were unknown.

The seven day rolling average of community cases as at today is 156, up from 148 yesterday.

On vaccines, Bloomfield said Pfizer had been the focus so far and it would continue to be the primary vaccine. However, he said there was a small number of people who could not have Pfizer for medical reasons - a few hundred people. A different option would be brought in for those and would offer Astra Zeneca as a second option for people aged 18 and over.

More details would come next week, but the first delivery was likely to be late November.

It would also be offered to those who were required to be vaccinated under a vaccines mandate, but who refused to take the mRNA Pfizer vaccine.

Bloomfield has also had advice from the Covid-19 technical advisory group on the timing and rollout of the boosters and he expected to tender his recommendation to the Government by Thursday. It was likely that programme would start in November.

As the Delta outbreak's total case numbers approached 4000, Prime Minister Jacinda Ardern has made her first visit to Auckland after three months into lockdown.

Ardern told reporters there had been limitations in Parliament which had meant she hadn't been able to come to Auckland sooner.

"Tāmaki Makaurau is my home."

It was a chance to talk to Aucklanders about their experience through lockdown, she said.

She said she would make sure they would consult with business representatives across the board, those who were operating and those who were shut during lockdown

Ardern confirmed it wouldn't be her last visit to Auckland during lockdown.

Throughout, she had remained in contact with business leaders as well as family and friends to see what lockdown had been like. However, she had to balance competing demands on the economy and health.

Asked how her location has impacted decision-making, Ardern said Cabinet members based in Auckland had been a part of those decisions right through. She again mentioned she felt they had struck the right balance.

Ardern defended the informal meetings she'd had with business owners, saying she will be back for more consultation.

Asked about issues Auckland businesses had highlighted, Ardern said on boosters, vaccines and vaccinators were ready to go. On MIQ which had been raised by a specific business owner, Ardern said work was underway on fixing the issues.

She wouldn't speak on behalf of what yesterday's protestors were wanting, but she emphasised that the majority of Kiwis had done the right thing.

Ardern denied the reason she hadn't done a walk through public spaces was because of the risk of protestors. She said it was because there were plenty of things on her agenda to do, like meet with business.

"In one day, I just can't visit everywhere but I will be back."

Cabinet had set down milestones for vaccination mandates for different workforces including the police and they would be considered.

Asked why she didn't visit smaller businesses, Ardern said she wasn't concerned about protestors and she said it was important to meet with various business representatives.

On the suggestion she was a stealth PM hiding from the public, Ardern said she was addressing media and she was also following the alert level rules which complicated informal interactions.

On reports of threats if teacher vaccination mandates were maintained, Ardern said she had been aware of those reports and mandate decisions weren't made lightly. In terms of education, children were a large group of people who couldn't be vaccinated which explained why a mandate was needed.

For past mandates at the border, there had been issues but they had been largely solved by working with employers and this could be done with schools as well

On Pasifika vaccination rates lagging behind the national levels, Ardern said there had been strong vaccination levels among Pasifika, particularly in the Auckland area.

Asked whether she was concerned about the relaxation of restrictions in Auckland, Ardern said vaccination levels are high and the restrictions being relaxed were not often considered high risk with regard to transmission.

"Talk to someone you know," Ardern said when asked what message she would send to vaccine-hesitant Pasifika.

Ardern said she wouldn't judge everyone's circumstances on a handful of conversations with business representatives, however, she said people were recognising that things were changing soon with the incoming traffic light framework

On the border, Ardern said we needed to be mindful about vaccination levels in other areas but a firm commitment had been made to see Aucklanders out of the region by Christmas. More information would be provided next week, including the date the border would open.

Ardern said they had been aware of the toll lockdown was taking on Auckland and it had been used to inform decision making.

On her personal opinion, Ardern said Auckland was her home and her friends and family lived there which meant she understood what toll it was taking.

Ardern didn't want to speak on anyone else's behalf but she noted people could see that things were changing soon in Auckland.

On yesterday's protests and the possibility of future protests turning violent, Ardern said New Zealand was not alone in this and people had taken a different perspective on lockdown measures. She hoped any protests would be done in a safe way.

Ardern said an ongoing vaccination campaign for boosters would continue past the 90 per cent threshold and they needed to be ready to vaccinate 5-11 year olds if that was enabled.

The scale of the campaign would be measured on how many people they needed to vaccinate.

Ardern didn't elaborate on the briefings she received on security around anti-vaxxers.

Ardern visited Auckland today ahead of expected announcements from Covid-19 Response Minister Chris Hipkins on when schools will be able to re-open for younger students in Auckland and other level 3 areas. Hipkins will also release details about vaccine certificates.

Hipkins has indicated the Government was on track to have a functional, accessible system by late next week.

Hipkins discussed vaccine certificates yesterday as a group of about 3000 protesters assembled outside Parliament expressing a range of anti-lockdown grievances.

Hipkins indicated a torrent of misinformation was infiltrating more discussions about Covid-19 vaccines.

Mandatory vaccinations for teachers have become a flashpoint. In the King Country, reportedly up to a third of staff at local schools are unvaccinated.

"One of the things I'm acutely aware of is, particularly in some of the smaller schools, some of that misinformation is actually having an impact on teachers' willingness to get vaccinated," Hipkins said yesterday.

"It's clear that the level of disinformation out there does seem to be growing."

The Events Transition Support Scheme will cover 90 per cent of unrecoverable costs for paid, ticketed events for more than 5000 vaccinated people.

Major event organisers have voiced relief at the scheme but promoters of smaller events have missed out.

People who were at an urgent care clinic in Auckland's North Shore are being told to stay at home and get a Covid test immediately after being identified as a location of interest.
The Shore Care Urgent Care Clinic at 74 Taharoto Rd, Takapuna, was visited by a person with the virus last Thursday, October 4.

The Ministry of Health is urging anyone who was there between 12.30pm and 3.45pm to get tested.

"Stay at home, test immediately as well as five days after you were exposed at this location of interest.

"Please continue to stay at home until you receive a negative day five test result."
Another location - Countdown Ōtorohanga - has been named a location of interest as well.

A person who tested positive for Covid was at the supermarket yesterday morning between 9.30am and 11.15am.