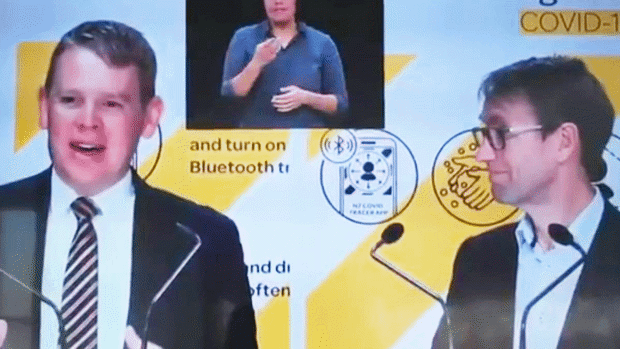 There's a lot to be said for Kiwis' entrepreneurial spirit.

Just a few short hours after Chris Hipkins' slip of the tongue, when he talked about Kiwis "spreading their legs" during Sunday's press conference, themed merchandise was already on sale.

Auckland-based small business Nofilterco is selling a "spread your legs" mug, with Chris Hipkins on it, so you can remember the official Government advice when you're having your morning coffee (or your afternoon wine, what you put in that mug is entirely your decision).

The mug features an image of Chris Hipkins alongside the message "Drive short distances to spread your legs" and can be purchased online via the Nofilterco website for $25.

The same company also sells, among other items, a mug with an image based on the photo of Dr Ashley Bloomfield getting vaccinated yesterday.

Hipkins' rather humorous slip of the tongue got the nation talking yesterday.

While reminding everyone to socially distance, he instructed New Zealanders to follow another set of bizarre rules, telling Kiwis about how they should social distance when they "spread their legs".

"It is a challenge for people in high-density areas to get outside and spread their legs when they are surrounded by other people," he said.

He meant to say "stretch their legs".

The gaffe didn't go past Bloomfield, who was seen smirking seconds later and raising his eyebrows after Hipkins' humorous phrasing.

Hipkins made light of his slip-up at the end of the media conference, saying: "I'm sure you'll all have fun with me later."

During today's Covid-19 press conference, Prime Minister Jacinda Ardern decided to hold up a piece of paper showing a heat map of where those considered contacts of a positive Covid-19 case are currently located.

Social media users were quick to use screenshots of that moment and edit them to show different messages and images on the piece of paper being held by the Prime Minister.

"To boost everyone's morale - here is a picture of a great fish Clarke caught just before lockdown" pic.twitter.com/O6WOuYtzJC