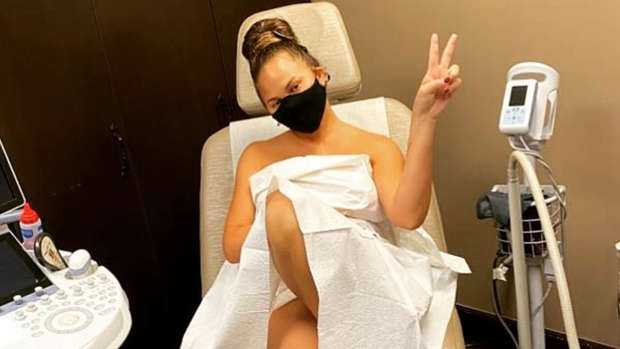 Model Chrissy Teigen has revealed she shocked to find she was pregnant when she underwent surgery to remove breast implants, despite a test coming up negative.

The 34-year-old revealed to fans that despite being given a pregnancy test before the surgery, she got a false negative result which meant she ended up under the knife while expecting her third child with John Legend.

After a Twitter user asked if she was pregnant during her breast implant removal surgery in June, the Cravings author replied "it's quite a story".

"I did the routine pregnancy test you do before surgery. It said negative. It was not negative," the 34-year-old model wrote, adding she took another test "a few weeks after surgery on June 19.

"And for many years now, I've taken pregnancy tests almost every month, praying to see a positive one day. Just wishful thinking. I never had a positive before," she continued.

"So the morning of John's album release, he wakes up at 3am to do Good Morning America. I woke up with him and was like man, should take my monthly test to be disappointed.

"I was not disappointed."

Teigen admitted she was "scared sh**less" after the operation, fearing something could go wrong after unknowingly undergone surgery while pregnant.

"So we prayed to the boob surgery gods that everything would be okay. Went to every appointment terrified. Even without the surgery, I didn't think I could get pregnant naturally anyway.

"So the odds just felt ... bad. But what they say so often can be true. When you give up on trying, life has a way of surprising you. In summary, my boobs hurt."

Chrissy and John revealed their baby news to fans earlier this week, also sharing a video of Chrissy's bump.