Many of us — tired of the rat-race, the grid-lock and work demands — dream of quitting the nine-to-five grind and hitting the road.

But, unless you've won Lotto or are independently wealthy, it often remains just that — a dream.

Not so for enterprising Auckland couple Carl Rapson and Justine Forster. They are living their dream and loving the result.

Before embarking on their life-changing journey a month ago, Justine had worked as an occupational therapist in South Auckland.

Carl had a high-pressure job as a senior project manager for Vodafone which saw him leaving home at 5.30am to beat the traffic rush hours.

Both agreed there must be "a better way to spend our time on this planet".

"After 10 years at Vodafone, I was fed up with being just a cog in the corporate wheel," says Carl.

"There was a round of redundancies and, although I was fine, it made me realise that these corporations don't really care for the individuals. It was time for a change."

Together they decided to sell their house and buy a motel — a stepping stone to their freewheeling life on the road.

"We're so happy that we now don't have to spend our weekends shopping for furniture and other stuff as there's nowhere to put it!"

He admits that both were used to big upheavals, and the couple had worked and travelled overseas for many years.

They ran the motel in Kerikeri for three years, with only one weekend off.

Selling it financed the dream they're now on and bought them their new abode, a tiny mobile home they've christened 'the Moog', a German-made, nearly new motorhome they're driving wherever the fancy takes them.

And a month into their new life, hopping back on the property ladder isn't a priority.

"We may one day look to buy a house somewhere in the country if we can find one cheap enough, or maybe just a section to park the Moog on," says Carl. "As we haven't seen the whole country yet, we don't know where we may want to eventually settle down, if ever, but it will be fun searching for our potential future home.

We are also open to the idea of tiny house communities and hope there will be changes to the district plans to allow more of this type of communal living."

Budgeting
To help finance day-to-day living costs, the couple plan to sell their photography and artwork at markets as they travel.

Carl says it's difficult to imagine almost total freedom when you're stuck in the 9 to 5.

"We now have the ability to go wherever we want, whenever we want, and we can change our plan if the weather is not playing ball or we arrive somewhere and don't like it.

"It's still early days and we do need to make a living while on the road, so that will dictate to some extent where we go and when."

They have a house-sit booked in Wellington in June and are booked to look after their old motel in August. Otherwise they are free to roam wherever they wish.

Both acknowledge the gypsy life isn't for everyone.

"You need to be passionate about tiny living or at least adaptable. If not, you may find yourself becoming frustrated. There are just so many positives to living in a tiny space compared to a more conventional house. The Moog is only 7.5m long by 2.4m wide — around 19sq m of floor space — smaller than most single garages. There's no room for clutter.

"We're so happy that we now don't have to spend our weekends shopping for furniture and other "stuff" as there's nowhere to put it!"

Although the Moog is small, it has defined areas which include a rear bedroom with a double bed, wardrobe and cupboard space.

"We have a separate toilet and shower and we have installed a composting toilet to fit in with our goal to live as sustainably as possible. Our kitchen is small but fully functional."

Justine says it's amazing how quickly she has adapted to cooking in a small space.

"Everything is within easy reach and luckily my culinary skills are quite basic so I don't have the need for lots of cooking utensils and gadgets. 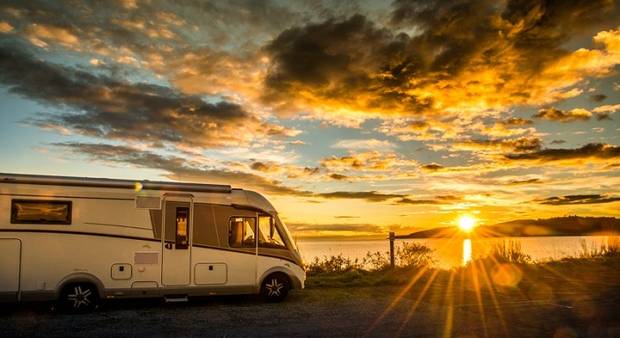 "We have a cosy lounge which comfortably fits five people so there's plenty of room to invite new friends over for happy hour. There's full gas/240v powered central heating and the windows are double-glazed. We have two TVs, a self-seeking satellite system and a digital control panel where we can monitor our solar and battery usage along with the levels of our water tanks. We also have the whole of New Zealand outside our front door."

Any advice for those tempted to take to the road?

"You don't need to have a heap of money in the bank to do what we are doing — but we would recommend that anyone contemplating this lifestyle has at least six months of their planned monthly budget to tide them over until they can build up their income
streams and/or find work."

No day the same
A day on the road starts early.

"We want to get the most out of each day. Also for a lot of the free camping spots, you need to leave by 9am or you'll get a fine," says Carl.

"We'll have our breakfast while going over our plans for the day, normally with an amazing view. We tend to have a plan, from the day before, of where we will be heading or what we'll be up to that day. But that often changes depending on the weather and how much charge we have in our batteries, and water in our tanks. If we are staying put, then we'll often do one of the local walks or get the kayak out and go exploring."

Does the close proximity put pressure on their relationship?

"Luckily for us, no. And, after spending three years in each other's pockets at the motel 24 hours a day, we knew we'd be fine."

However, he admits that if you don't particularly like being in such close proximity to your partner, then tiny living won't improve matters.

He also says the experience is paying off in spiritual, if not economic terms.

"As I talk to you, we're on the shores of a lake in Rotorua with no one else in sight. A couple of days ago we were parked on a beautiful Coromandel beach.

"We didn't want to wait until we retired to get out and do the things we love to do, such as kayaking and surfing. We already feel the aches and pains of getting older and know this will only get worse."