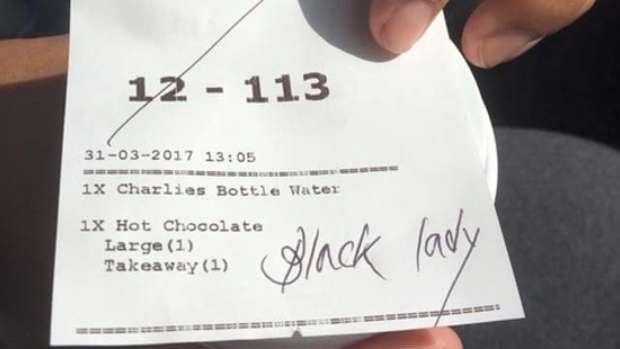 A Maori woman says she was shocked after the words "black lady" were scrawled on the receipt for her hot drink order.

The woman, who asked to stay anonymous, went to Cypress Cafe in St Heliers Bay on Friday with a friend.

The friend made the first order for both of them, and food was delivered to their table.

But when the woman, who is Maori, went up to order a second drink, she claims her hot chocolate was never brought to them.

When she went to collect it from the counter, she said she found the words "black lady" written on her printed receipt.

"To be honest, I didn't know how to react, because it's never happened to me before," she said. "I didn't want to approach her, I just left it, left the shop. My friend wanted to approach the lady, but I told her to leave it."

She said the cafe shouldn't label people in such a confronting way.

"Even if it was just to remember who was who. Just ask for someone's name, that's easier.

"For other people, if something like that happens, don't be like me and try to shrug it off.

"I wish I did, but I just didn't know how to approach them."

When approached by the Herald for comment, Cypress Cafe owner Don Choa said it never happened.

He said he didn't know the woman or remember her or the incident and was at the cafe all day on Friday.

"You check for yourself, if you are a reporter, check the background of this black woman.

"I think she is a troublemaker.

"I think you're better to inspect her, whether she's criminal or something, because she has said a not true thing."

Choa said he wouldn't be asking his staff about it.

"But we have many staff here, every day is different.

"She's [the complainant] a very ugly woman, I think. If something had happened, she had to complain to me, but she contacts New Zealand Herald newspaper.

He said if a customer was unhappy, they should talk to him.

When told about Choa's comments, the woman said it was surprising and hurtful.

"I mean, I have a photo of the receipt, so clearly I didn't lie about it.

"He doesn't know me, and just because my skin is dark, that doesn't make me a criminal.

"It's so hurtful to say that, or assume I lied. He probably has cameras there, that would have picked it up.

The woman's friend said she was shocked the cafe would deny it.

"I assumed they'd give some excuse, or try to give a bad apology but this, oh my God.

"You've got to be kidding me. Surely they have security cameras they could look at?

"For me, that response just solidifies the racist undertones. It's now even worse than we thought it was.

"I thought maybe just ignorance, but this is actual out there prejudice."

The friend said she was furious when it happened, and ready to confront the cafe workers, but her friend asked her not to.