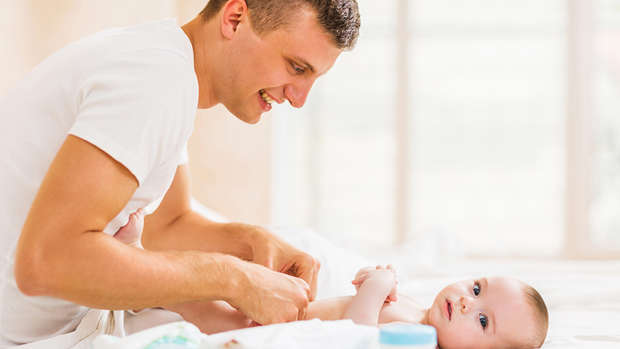 A woman has defended a man after he was shamed out of a parents' room in a Sunshine Coast shopping centre.

According to witness Mikaa Ives the man was trying to change his son's nappy when another mother walked over to him, accused him of being a "sicko" and ordered him to leave.

"There was a dad in the middle of changing his son's nappy, already having a difficult time with his son not wanting to be changed," Mikaa Ives wrote on a local parenting Facebook group page.

The woman allegedly accused the father of "staring at her naked kids" and threatened to call security.

"The lady piped up and started abusing the dad for being in the parents' room: 'It's only for mothers, get out you sicko', literally saying she would call security and say he was staring at her naked kids if he didn't leave the room," Ives said.

"He picked up his son who mind you didn't even have a clean nappy on yet and went to stand outside the door.

"His son was hysterical and he's just saying 'its okay mate, we'll go back in there soon."

Ives, who was disgusted at the woman's behaviour, walked over to the father and told him to come back inside and finish putting a clean nappy on his child.

She said if the other woman called security she would back him up.

"At this point I thought f*ck this, told the dad to come back in and finish changing his son, told the lady that if she wanted to call security to go ahead because I would 100 per cent back the dad up," she wrote.

"Old mate finished changing his son, thanked me and off he went.

"I was absolutely shocked that the poor bloke felt he had no choice but to leave like she said ... I was BEYOND disgusted."

Ives went on to say that the mother in question wasn't even changing her children - she had just gone into the parents' room to check her phone while her kids played.

"ITS A PARENTS ROOM NOT A F***ING MOTHERS ROOM. If you're one of the people who act like that when a dad is simply changing his child, then I suggest you stay the f*** away from the PARENTS room," she vented on Facebook.

The shopping centre website refers to its "parent rooms" being equipped with a microwave, lounges, change tables and toilets.

More than 300 people have commented on the post with a number of fathers revealing they've had similar incidents happen to them.

"Happened to me twice now. Thank goodness my little boy is out of nappies now,' one father shared.

Another wrote: "I've had security called on me for taking my daughter into a parents' room to change her nappy. Security basically told her to pull her head in as I was clearly changing a baby."

"I'm a dad n copped the same when ever I had to change my son's nappy. Didn't move just told them to [do] whatever they needed to do to feel better about themselves," one dad wrote.

"When someone kicks you out of a parent's room you literally have no where to go with your children, it's good to know that there are people out there who care."