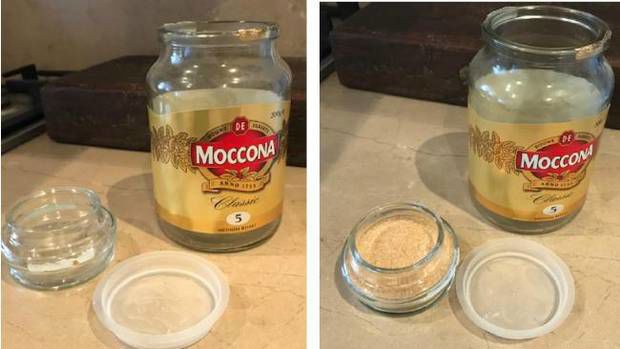 If you're not one to throw out old coffee jars but haven't really found a use for them, this crafty idea might just be the hack for you.

Australian mum Leah Goulis was sick of all her used jars sitting in the garage waiting for her husband to store his screws in. Then he showed her something about the jar's lid that completely changed her tune.

"I was making myself a coffee when I realised I had come to the end of yet another coffee jar. As I went to toss it in the recycling bin, my husband Jerry (he really wants to be recognised for this brilliant idea, so let's give him his moment) urged me to stop," she told Kidspot.

Goulis husband then demonstrated that the top seal of the Moccona jar comes off, allowing it to be used as its own separate storage space for things such as tea bags or sugar.

"Now, I don't know about you, but the idea of cutting down on the number of plastic containers to pack on a picnic or take a trip to the beach sounds pretty good to me, so I decided to share the news," Goulis shared.

She then shared the hack on the News Mums Australia Facebook group and was shocked at how many mums loved the idea and even shared their own uses for the jar.

"I vote that this is a HACK! You could also put hummus in the lid and cut up carrots for a picnic in the main bit. Hipster picnic hack!" one very keen mum commented.

"Hack. Now I have to buy Moccona …" another confessed.

Another Facebook mum chimed in: "I didn't even know they did that. I wonder if it would still seal effectively or possibly spill out everywhere when you take the lid back off?"

Some of the suggestions included putting yoghurt in the top and fruit in the jar or using the lid for salad dressing while the salad can be kept fresher in the base.