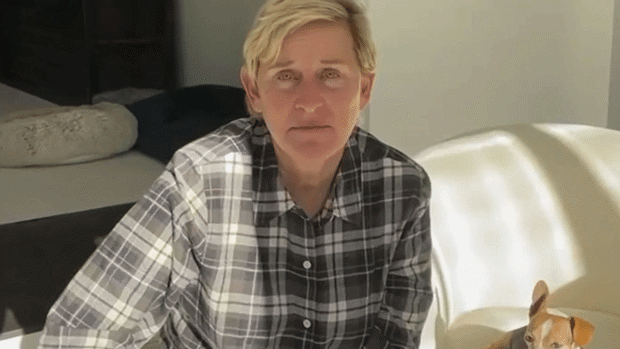 Ellen DeGeneres has given fans an update on her health after she tested positive for Covid-19.

She shared a video on her social media accounts and thanked fans for their support. The talk show host spoke openly about how she was feeling and revealed she experienced an unexpected symptom.

"Hi everybody, just saying thank you all the well wishes out there. I appreciate it very much. I'm feeling 100 per cent, I feel really good," she says.

"One thing they don't tell you is that somehow, you get excruciating back pain. Didn't know that was a symptom, but I talked to some other people - back pain," she explained.

She ends the video by showing off her Connect-4 skills with her wife Portia De Rossi.

"Anyone who has been in close contact with me has been notified.

"I'll see you all again after the holidays. Please stay healthy and safe."

The Covid infection caps a dismal end to a horror 2020 for DeGeneres, whose show was plagued by allegations of bullying.

The allegations of workplace bullying included claims of a "toxic" workplace environment, accounts of intimidation, racism, and unjust termination.

The claims led to an investigation and the departure of several of her staff.

An internal investigation was carried out as a result.

DeGeneres apologised after the bullying allegations were made public - but even that was slammed as being the "worst non-apology ever".

While ratings for all talk shows are down in the US right now, The Ellen Show's ratings have dropped the most, suggesting that perhaps that trust hasn't been regained so far.

She welcomed back live audiences for filming in October, though the group was limited to 40 people and they had to wear masks.