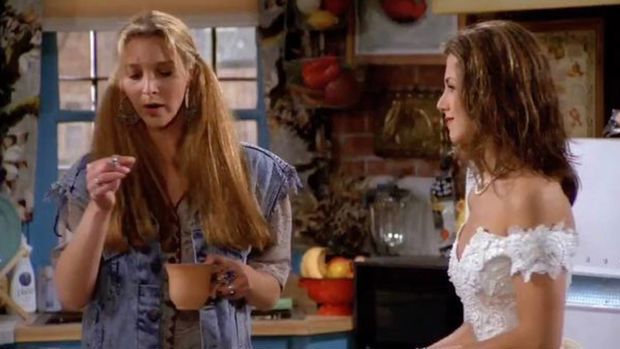 An eagle-eyed fan has spotted a continuity error in the first episode of Friends, which had gone mostly unnoticed for 27 years.

With so many fans going back to re-watch old episodes of the show, after the release of the Friends Reunion earlier this week, more and more Friends clips are making their way onto social media.

One fan posted on Twitter a clip showing a continuity error in the show's pilot episode, titled "The One Where Monica Gets a Roommate".

"Oh I just pulled out four eyelashes, that can't be good," Phoebe says.

When the camera immediately cuts to Monica's date, Paul, as he is sitting on the couch, Phoebe can be seen sitting on a chair drinking coffee.

I never noticed the continuity error in the #Friends pilot that makes it look like Phoebe is reacting to herself (or Ursula is secretly there...) pic.twitter.com/2PMBFZTDEq

The tweet went viral as more people admitted they had never noticed the error in the pilot episode.

The original tweet was posted by Jarret Wieselman, who works for Netflix.

"I never noticed the continuity error in the #Friends pilot that makes it look like Phoebe is reacting to herself (or Ursula is secretly there...)," he posted alongside the short clip.

Ursula is Phoebe's twin sister, a lesser character who appears in a handful of Friends episodes, also played by Kudrow.

One person said that a lot of people would not have noticed the error because it would not have been seen in its original aspect ratio on television.

"Not much of an error as you would not have seen this in the original airing. This is a prime example of why content should remain in its original aspect ratio and not opened up just to fill the whole TV," the Twitter user said.

"It's still a production error since Lisa should've been nowhere near that shot. I can't imagine her sitting there like, 'Am I out of the shot? Good. I'll just sit here in costume sipping from this prop mug'," another Twitter user pointed out.

I thought it was a joke but it's real! 😳 pic.twitter.com/mtR4Rdu6Vg

Another Twitter shared a clip that shows Phoebe walking to the chair after saying her line about the eyelashes, prompting Twitter users to wonder whether the scene has since been edited on some platforms.