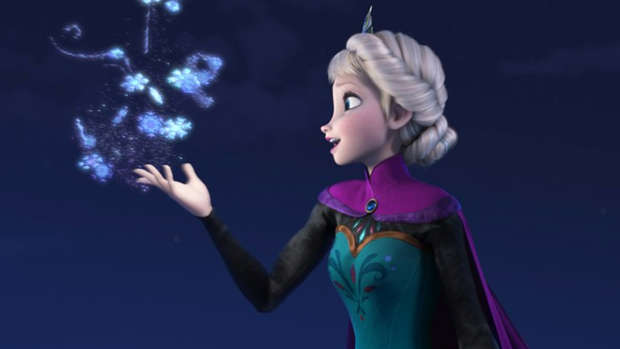 Disney's Frozen became a sensation for its empowering, female-driven plot - but this distinctive story arch wasn't part of the original plan, a producer has revealed.

In the 2013 animated movie, newly-crowned Queen Elsa becomes afraid of her icy powers and locks herself away from her kingdom of Arendelle. Her younger sister, Anna, comes to her rescue, and it is Elsa's act of true sisterly love that breaks the spell threatening to turn Anna into ice forever.

The initial story arch, however, pitted Queen Elsa as a woman turned evil after being scorned by a man and left at the altar, producer Peter Del Vecho told Entertainment Weekly. Anna wasn't related to her, and instead of going to find Elsa, she was involved in a typical "damsel-in-distress" plot that saw ice harvester Kristoff attempt to save her.

"So Anna was not a princess. Elsa was a self-proclaimed Snow Queen, but she was a villain and pure evil — much more like the Hans Christian Andersen tale," Frozen producer Peter Del Vecho revealed.

"We started out with an evil female villain and an innocent female heroine and the ending involved a big epic battle with snow monsters that Elsa had created as her army," he added.

Frozen underwent many different drafts, and yet all of the earliest iterations opened with the following prophecy: "A ruler with a frozen heart will bring destruction to the kingdom of Arendelle."

As originally conceived, Anna was a pure-hearted heroine and Elsa, an evil snow queen."We learn Elsa is a scorned woman; she was stood up (by Hans) at the altar on her wedding day and froze her own heart so she would never love again," Peter said. "Both Elsa and the audience assume she’s the villain from the prophecy."

The final act's original action saw the evil snow queen creating and unleashing scores of snow monsters upon our heroes as kindly Kristoff - the mountaineer with the reindeer Sven - who develops a crush on Anna along the way - has "a Han Solo moment" and comes to Anna's aid.

To halt Elsa’s attacking snow monsters in their cold tracks, the duplicitous Prince Hans intentionally causes a massive avalanche, despite the fact that Anna, Elsa and all of Arendelle could perish in the icy extinction-level event.

Anna persuades Elsa to use her powers to save the kingdom as the prophecy from the beginning of the film turns out to be about the unfeeling Hans, not Elsa.

As a result, Elsa’s heart unfreezes, allowing her to love again.

However, for the Frozen team, this climax was not satisfying enough.

"The problem was that we felt like we had seen it before," Del Vecho said. "We had no emotional connection to Elsa — we didn’t care about her because she had spent the whole movie being the villain. We weren’t drawn in. The characters weren’t relatable."

Co-director Chris Buck and Jennifer began re-evaluating all of the elements they had developed and questioned whether Elsa should be a villain.

After some hard work, they made the breakthrough that would gird the version of Frozen audiences worldwide have come to love: Anna and Elsa were sisters.

"That led to making Elsa a much more dimensional sympathetic character, and instead of the traditional good vs. evil theme we had one that we felt was more relatable," the producer continued. "Love vs. fear, and the premise of the movie became that love is stronger than fear."

The team even held a "sister summit" at Disney, calling in employees to ask them about family experiences in order to divine ideas on how to make Anna and Elsa’s sisterhood more sympathetic.

As the producer explained, "One of the things Chris Buck had in most versions of the film was a moment where Anna’s heart was frozen and needed to be thawed. Chris said, 'Does it always need to be true love’s kiss that solves that problem? Does it always have to be the man who comes in and rescues the female? Could it be something different?' and that led to a different ending.

"Now that they’re related, Elsa had her own fear and it was Anna who would save the day instead of Elsa by rescuing her sister — and it would be that selfless act that thawed Elsa’s heart," Peter said.

At this point, Disney executive Catmull gave Jennifer the ultimatum: all or nothing.

Feeling the heat, Jen scripted an emotional new final act, but there was just one nagging problem left to be resolved.

During the finale action, the audience is supposed to undergo a progression of expectations and twists leading to the film's unconventional conclusion. First, the viewer has to feel that Hans could be the hero, then they have to feel Kristof was the answer.

It’s not until the last possible moment that we realise Anna saving Elsa is the solution. But how do you stage that in a visual way that makes sense?

Jennifer delivered the goods ... almost. As Peter recounted, she crafted a terrific ending but it proved difficult to stage. That's when story artist John Ripa was struck with inspiration. John stepped away to storyboard the sequence and when he returned, the storyboard artist offered a solution in which the emotions that Elsa experienced produced a white-out blizzard.

"That allowed us to isolate Hans and Elsa from Anna searching for Kristoff through the mist," Peter said. "That way we can reveal Kristoff just moments before we reveal Elsa to Anna, and it allowed the timing we needed."

"When he pitched that ending [Disney Chief Creative Officer] John Lasseter, the directors and the whole story team stood up and gave him a standing ovation. He helped crack visually how we were going to depict the ending."