A 43-year-old German prisoner who travelled around Portugal in a camper van is the focus of a new Scotland Yard investigation into the disappearance of Madeleine McCann, the BBC reports.

Police reportedly now believe he was in the area where the 3-year-old was last seen in May 2007.

The suspect has been named as Christian Brueckner, sources in Portugal have told Britain's Daily Telegraph.

Detectives, who did not name the man, said he was in jail for an "unrelated matter" and had "previous convictions", but they declined to supply further details.

Suspect identified as 43yo German man. We reveal 2 vehicles suspect is known to have used around the time of Madeleine’s disappearance & phone numbers relevant to investigation.

Police said the case remained a "missing persons" investigation because it doesn't have "definitive evidence" as to whether Madeleine is alive or not.

However, German investigators at the Federal Criminal Police Office, the Bundeskriminalamt (BKA), have reportedly classed it as a "murder inquiry".

A spokesman for the Braunschweig Public Prosecutor's Office, Hans Christian Wolters, said: "In connection with the disappearance of the 3-year-old British girl Madeleine McCann on May 3 2007 from an apartment complex in Praia da Luz, in Portugal, the Braunschweig prosecution is investigating a 43-year-old German on suspicion of murder. "We are assuming that the girl is dead.

"With the suspect, we are talking about a sexual predator who has already been convicted of crimes against little girls and he's already serving a long sentence."

Scotland Yard yesterday appealed for information about the van and the suspect's other vehicle, a Jaguar.

The man transferred the Jaguar to someone else's name the day after she vanished.

"Someone out there knows a lot more than they're letting on," DCI Mark Cranwell, leading the Met inquiry, said.

Last month, Madeleine McCann's parents spoke days before the 13th anniversary of their daughter's disappearance, comparing what she went through to victims of Covid-19. Kate and Gerry McCann say they're haunted by thoughts their daughter could still be suffering, 13 years after her disappearance.

Madeleine was 3 when she vanished from a holiday flat at Praia da Luz, Portugal, on May 3, 2007, while her parents ate with friends at a nearby tapas restaurant.

The couple was going to mark the anniversary of their daughter's disappearance with a prayer gathering on Sunday, but because of lockdown rules, they will hold an online service. 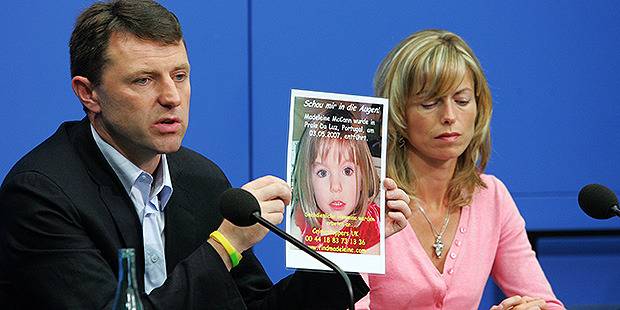