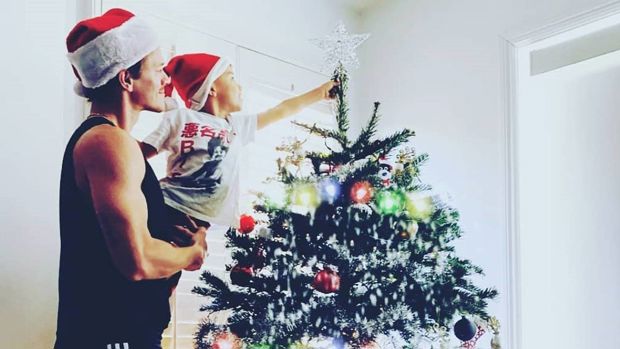 Glee star Rivera tragically drowned after taking a boating trip with Josey in July. Her body was found in California's Lake Piru six days after she was reported missing.

Now, 5-year-old Josey is preparing for his first Christmas without his mother following the tragedy.

Ryan shared a photo of Josey topping a Christmas tree in their home with a silver star, his proud father lifting the young boy up to help him place the decoration.

"#HappyHolidays to all. You, you, and even you, all of ya. Hope you get nothing but happiness," he wrote.

Authorities revealed at the time of their investigation into Rivera's death Naya may have managed to help Josey back on the boat to safety but was unable to muster the strength to save herself.

"We know from speaking with her son that he and Naya swam in the lake together at some point during their journey," the sheriff said yesterday.

"It was during that time that her son described being helped into the boat by Naya who boosted him onto the deck from behind. He told investigators that he looked back and saw her disappear under the surface of the water," Ventura County Sheriff Bill Ayub said at the time.

Rivera's death was ruled an accidental drowning, according to the county's Medical Examiner's Office.

In September Rivera's sister, Nickayla called for "compassion" after claims that she and Dorsey moved into a new house together to help raise Josey.

She wrote on her Instagram story: "I'm not concerned with the ways things look because no one can see each agonising moment we all endure.

"What matters most I've learned, is to show compassion, not to judge others, and never take a moment for granted. I hope you all can do the same."