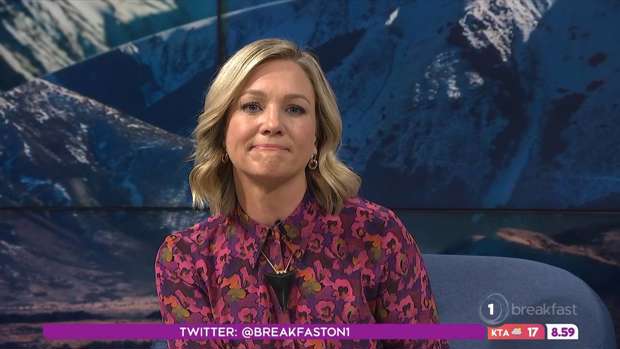 Hayley Holt has signed off from TVNZ's Breakfast programme, making an emotional dedication to the unborn baby she tragically lost earlier this year and leaving her colleagues in tears.

Holt told viewers that she was dedicating the show and her "whole life" to "Frankie Tai, my bubba who's up there, my evening star".

The popular host tragically lost her unborn baby at seven months gestation while she was isolating herself at home during the peak of the Covid-19 outbreak.

There wasn't a dry eye in the house as her colleagues paid tribute to Holt, with Jenny-May Clarkson, who will replace Holt on the show, saying that Holt was "a superwoman with heart and soul and smarts".

Matty McLean told Holt: "I'm so lucky to get to know you and call you my buddy," and described his friend as "smart, inquisitive, funny and absolutely bonkers".

John Campbell paid tribute to Holt, saying she remained strong as she tackled a "terrible year".

"I'm super proud of you, you've displayed a gorgeous resilience."

TVNZ announced earlier this week that Holt will move into sports presenting alongside Andrew Saville on 1 NEWS at Six, rotating with Saville throughout the week.

In a statement, Holt said: "Sport has been part of my life ever since I can remember and I'm excited to be bringing viewers these great stories alongside Sav.

"It's going to be hard to leave my Breakfast whānau after nearly three years on the show. We've had such an amazing time working together and I'm so grateful for the team's support as I take on this new role with 1 NEWS at Six."

Jenny-May Clarkson moves from her news-reading role to presenting on Monday, August 17, and Holt begins her new sport role on August 24.