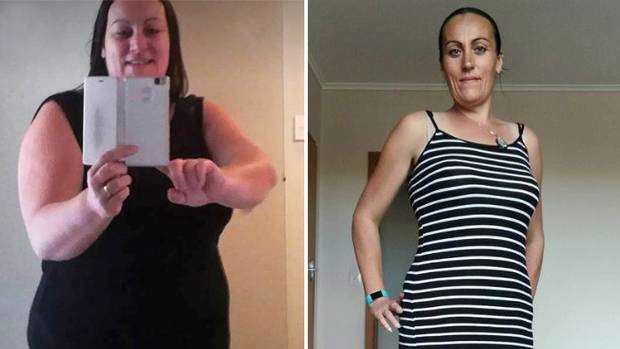 Heart disease is New Zealand's biggest killer and for years it had been stalking Jess Shannon - that was until she decided to fight back and drop 62kg of body weight in 14 months.

The 33-year-old mother of three's remarkable weight loss came about after she was rushed into Tauranga Hospital last year complaining of chest pain and waking at night gasping for air.

Doctors soon discovered her heart was giving up.

Having been overweight most of her life, her heart had become enlarged and could no longer pump blood properly as it ran at just 20 per cent efficiency.

Shannon found herself on death's door and reliving a childhood horror.

Years earlier when she was just 10, her own mother had died from a heart attack.

It had struck the same night her mum left the hospital after suffering two earlier heart attacks.

Shannon and her sister were eating dinner with her when she tumbled from the kitchen table to the floor, right before their eyes.

Twenty years later, that devastating moment replayed itself in Shannon's mind as the doctors told her she must change her life or die.

"I decided I need to be around for my kids, I don't want to repeat family history," she said.

Her tale comes as World Heart Day is set to be held across 120 countries on Saturday in a bid to raise awareness at the 17.5 million deaths caused by cardiovascular disease globally.

In New Zealand, heart disease claims one person every 90 minutes and accounts for one in every three deaths.

To help mark World Heart Day on Saturday, Auckland's Sky Tower in partnership with the Heart Foundation will "pulsate" with red light in what Shannon hopes is a beacon for others to also take action before it is too late.

She has now reached a stable weight of about 70kg and her friends constantly ask how she did it and if she took a weight loss pill.

"There are no magic pills," she said.

Instead Shannon used the thought of her family as motivation to transform her diet and start exercising.

Where she had often previously skipped breakfast and then had a "massive dinner" followed by sugary treats, she instead began to simply eat three healthy meals.

"In the morning, for breakfast, I have two Vogel's toasts with tomato or eggs or hummus, or sometimes even peanut butter," she said.

"It just depends what I feel like – muesli, yoghurt. At lunchtime I have salad. For dinner I have a normal meat and vege dinner – just small portions."

Coming out of hospital she was told she should exercise at least 10 minutes each day. "That ain't going to do anything," she thought and aimed higher.

Living in Tauranga at the time, she began walking up Mount Maunganui. It took an hour and 20 minutes the first time. Later, she cut the time down to just 18 minutes.

Recently, Shannon teamed up with a friend to complete a relay leg of a half marathon in her new home town of Waipukurau in Hawke's Bay.

The two friends were the fastest team home, completing it in 2 hours and 40 minutes.

For a woman who just over a year earlier would get puffed taking a few steps, "it was an amazing moment".

However, Shannon acknowledges the journey isn't over and that it can be "mentally draining" to stay on track.

She has battled emotional eating her whole life and believes the trauma of her mum's tragic death and a stressful childhood played a part in her gaining weight.

Yet, she said, she is never going back to an unhealthy weight.

"It's been a bloody hard road," she said.

"But I'm proud because I know I will be there for my children and husband and can help set them up to have a healthy life of their own."