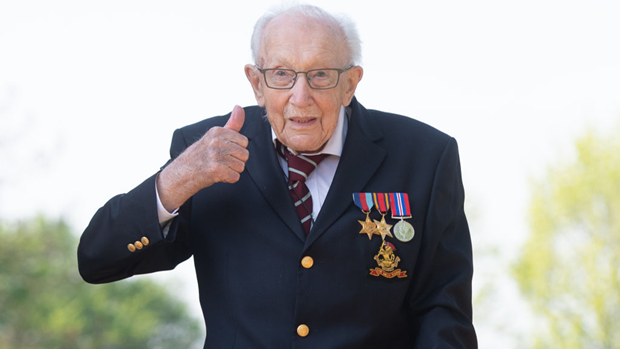 After completing 100 laps around his garden, raising $61 million for NHS charities, and recording a number one hit single, Captain Tom Moore has turned 100 years old!

The decorated war hero has captured the hearts of the world in recent weeks and it seems many people are keen to celebrate his milestone.

Celebrations for Captain Moore's birthday is set to begin with a flypast from the Battle of Britain Memorial Flight, weather permitting.

120,000 birthday cards have now been opened and displayed at Bedford School ahead of Captain Tom Moore's 100th birthday on Thursday. His grandson Benjie took a look this afternoon... #CaptainTomMoore pic.twitter.com/M1znT6eU3O

Confirmed by the British Ministry of Defence, the BBMF, which includes six Spitfires and a Lancaster Bomber will fly over Moore's home as a salute to his incredible fundraising efforts.

On top of the air show, more than 125,000 birthday cards have been sent to Moore to mark his special day.

Among those to send well wishes are the Duke and Duchess of Cambridge, England football captain Harry Kane, and England cricket captain Joe Root.

All the birthday cards sent to Moore have been set up at a hall at Bedford School, near to the captain's home.

In typical humble, Tom Moore fashion, he thanked everyone for all the well wishes and presents he has received.

"I continue to be offered lots of lovely items. I really do have everything I need but others are struggling due to Covid-19 so, rather than giving to me, please look to donate these generous offers to a local care home or someone in your community. Thank you."