He captured hearts around the world after raising $66.5 million for the UK's National Health Service by pacing 100 laps around his garden, aided by a walking frame. Now centenarian Captain Tom Moore is set to be rewarded with a knighthood.

The British WWII veteran, who was recently promoted from Captain to Colonel, has been described by British Prime Minister Boris Johnson as a national treasure and a "beacon of light" during the Covid 19 coronavirus crisis.

According to the Daily Mail, Johnson said: "Colonel Tom's fantastic fundraising broke records, inspired the whole country and provided us all with a beacon of light through the fog of coronavirus." 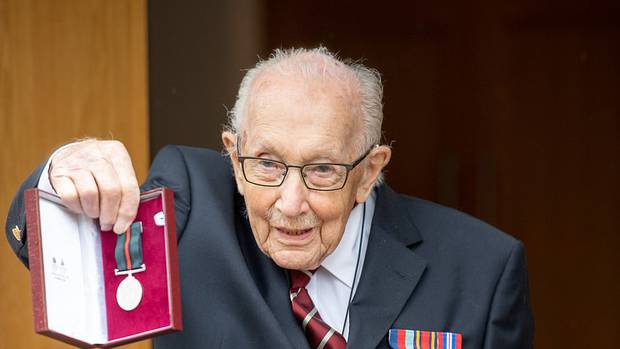 "On behalf of everyone who has been moved by his incredible story, I want to say a huge thank you. He's a true national treasure."

His pending knighthood, approved by the Queen, will formally be announced today, reports the Daily Mail.

"Never for one moment could I have imagined to be awarded with such a great honour. I'd like to thank Her Majesty the Queen, the Prime Minister and the great British public. I will remain at your service. This started as something small and I've been overwhelmed by the gratitude and love from the British public and beyond.

"We must take this opportunity to recognise our frontline heroes of the National Health Service who put their lives at risk everyday to keep us safe."

120,000 birthday cards have now been opened and displayed at Bedford School ahead of Captain Tom Moore's 100th birthday on Thursday. His grandson Benjie took a look this afternoon... #CaptainTomMoore pic.twitter.com/M1znT6eU3O

In celebration of his 100th birthday on April 30, Colonel Tom received two flypasts in his honour, one from RAF helicopters and one from World War II Spitfires and Hurricanes.

And birthday cards for the heroic centenarian flooded in by the thousand, completely filling a local school hall.

In addition to his garden walking for charity, Tom has also released a hit single, You'll Never Walk Alone, with singer Michael Ball. It quickly topped the charts, making him the oldest artist ever to have a UK No 1.