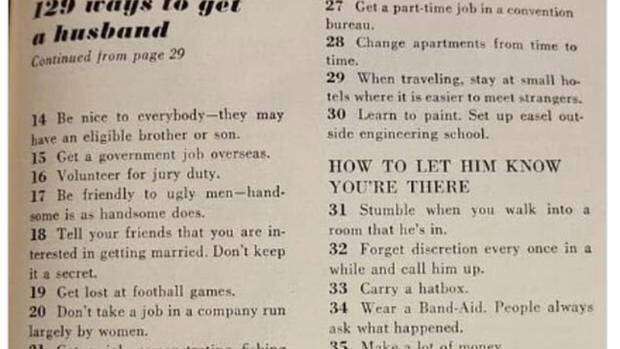 A "shocking" list of tips for finding a husband has gone viral online.

Originally published in a 1958 issue of American magazine McCall's, the list was first shared on Facebook in 2018, but was resurfaced on Twitter by journalist Jane Lavender, according to the Daily Mail.

The "amazing" list includes tips like standing on a busy street corner with a lasso in hand, or lugging a hatbox around to catch the attention of single men.

Other advice includes "rent a billboard and post your photo and phone number on it" and "be friendly to ugly men".

The original article begins: "In the United States today there are sixteen million women over the age of seventeen who are still waiting for a marriage proposal. Presumably, the vast majority of them would like to be."

Lavender shared a snap of the list on Twitter and it quickly went viral as users responded to the outdated advice.

"I need to find myself a hatbox - now," one joked.

"'Get a government job overseas' and 'make a lot of money'... good advice but erases the need for a husband," another pointed out.

"Learn to paint. Set up easel outside engineering school," is one of the pointers.

"How strange. I walked past an engineering school last year & kept tripping over all these easels – now I understand why," commented a third.

Others said the list was the perfect prompt for a rom-com, while others joked that it helped them finally realise why they're single.

Number 23 on the list proved popular: "Go to all school reunions, there may be widowers there".

"23 is my favourite—hell, you could start circling the obits like classified ads if you get really thirsty!" one wrote in response.

"I'd like to know more of the backstory to 38 and why the author chose to say dropping a handkerchief 'still' works. Was it falling out of fashion? Was there a PR campaign by the handkerchief makers? So many questions!" said another.

The woman who originally shared the list in 2018 told BoredPanda that her boyfriend had bought it at a rummage sale for $1.

"I think the article is reflective of the social mores and 50s style in general," she said.

"I found the comparison between what was acceptable then and what is acceptable now fascinating. It also made me grateful that so much progress has been made."