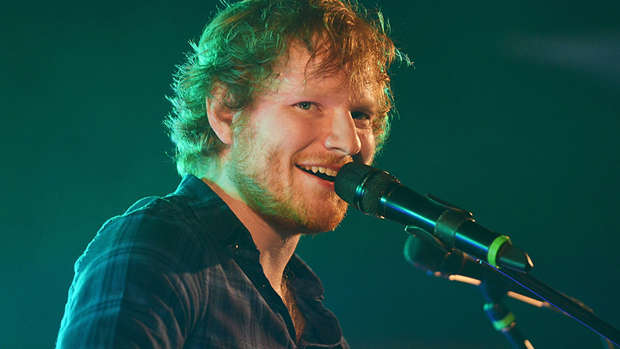 As Ed Sheeran sang the lyrics if you love me come on get involved at the Dunedin concert on Sunday night, Jason Higgins was getting down on one knee to propose.

The moment had come after a month of planning, in which the Christchurch man had devised to pop the important question to his partner, Tina Cummings, during "their song".

Higgins had prepped the couple's friends, who were secretly standing by with the ring and cameras, and he waited anxiously for the cheesy lyrics of How Would You Feel.

"I wanted to do some sort of half decent proposal rather than just popping the question, so I came up with the idea that we were already going to Ed Sheeran and How Would You Feel is our song so I thought that would be an appropriate time to do it," Higgins said. 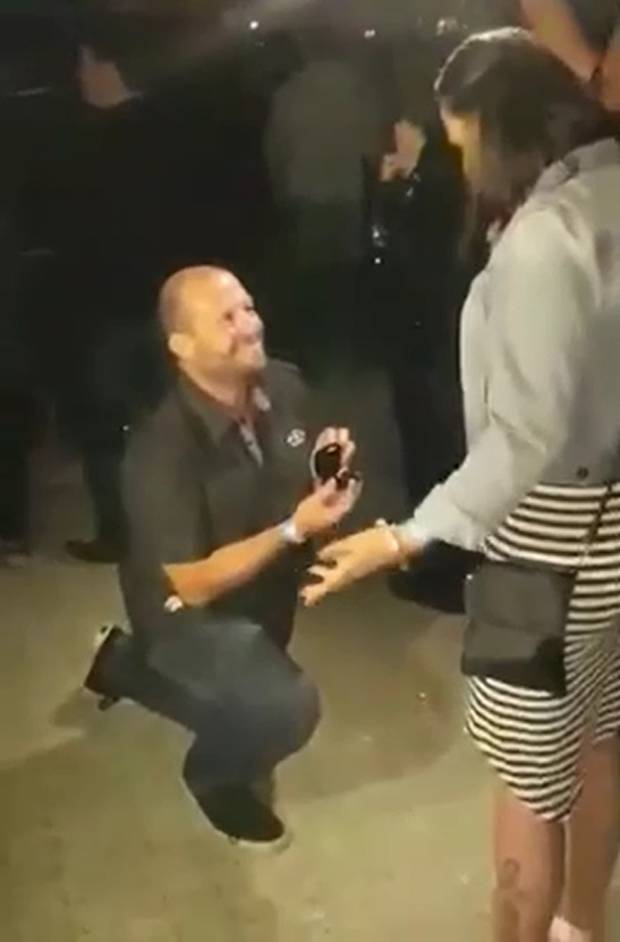 Jason Higgins proposing to a surprised Tina Cummings at the Ed Sheeran concert in Dunedin on Sunday night. Photo / Supplied

But instead of a faultless romantic moment, Higgins was shocked into action when the singer announced his last song of the night would be Sing, and the planned proposal song would not be played.

"I was trying to play it cool and enjoy the show, but sort of lost track of time and when I heard him say it was the final song I thought 'Ay? Hang on a minute, he hasn't played the song that I wanted', so I thought 'sh*t I have to do it now'," Higgins told the Herald.

"I didn't even really get a chance to say anything sweet and lovey-dovey, I just went down on one knee and threw the question at her."

Surrounded by Ed Sheeran fans and the spotlights of phones, Higgins managed a "will you marry me" before he was ushered to his feet by his stunned girlfriend.

Cummings said she had no idea the proposal was coming, and her first reaction was to ask him to get up because lots of people were watching. 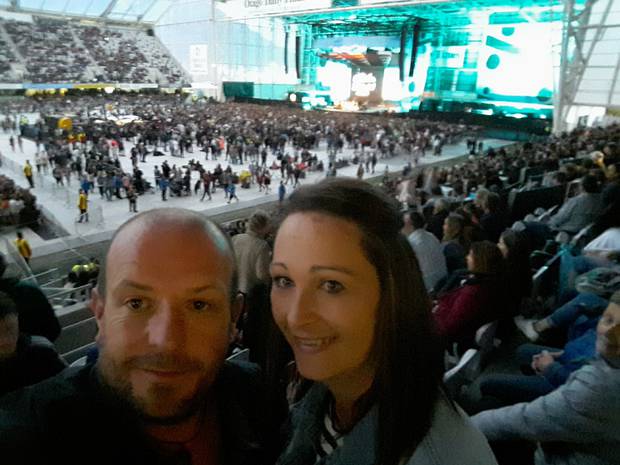 Jason Higgins and Tina Cummings at the Ed Sheeran concert, before the big proposal. Photo / Supplied

"We went to the concert with a group of friends and I saw them doing a few funny things but never really clicked onto it, and then next minute he turns around in front of everyone and gets on his knee – I was like 'oh my gosh'," she said.

"After I got over the shock, one of his friends came over and said 'so are you going to say yes' so I was like 'oh yes! yes!'."

Higgins said despite his new fiancée having been horrified by the attention, he was definitely happy with the end result.

"She is a little bit shy and the last thing she wanted was to be the centre of attention, but I have been known to take her out of her comfort zone so I figured once more wasn't going to hurt.

"The funny thing was the people with us had their lights on, and the people around us were getting quite pissed off, so they had to explain I was going to propose any second - so there was probably a good 20 odd people who clapped, cheered and yahoos for us afterwards.

"It all fell into place quite nicely in the end."

Cummings said the couple had been dating for 11 months, and the Ed Sheeran concert was their first concert together.

"We are both Ed Sheeran fans. It was one of the similarities we have," she said.

"The celebrations went well into the night after that shock surprise."

The couple are looking to have the wedding late next year.