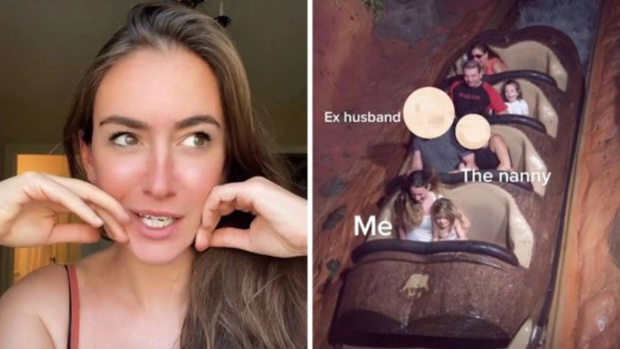 Disney World is supposed to be one of the happiest places on Earth.

And for one wife that's what she thought when she went on a family holiday with her husband and child - that's until she went through an old photo and discovered the truth.

Natalie, a now single mum of two, explained they went on a family holiday and took their nanny with them to help with the kids.

They enjoyed rides together but it was only looking back on a photo taken on the log flume by Disney World itself that it exposed her husband cheating with their nanny.

"We went to Disneyland in Orlando and took the nanny with us to help with the kids … Not the husband," she penned as the caption of her trending TikTok testimonial.

"I was going through old photos and came across more than one where they were a little too close," she added.

The photo showed the nanny and Natalie's husband snuggling up with each other just one row behind his wife and their daughter.

After discovering the photo, Natalie ended her relationship with her husband.

The nanny has since filed a restraining order against her livid former employer.

Natalie said her wayward ex-hubby had been "lovely and remorseful" since the break-up.

However, Natalie says in a follow-up video the nanny has since moved into the divorced couple's family home.

She explained the nanny had filed a police report against her and had recently given birth to her ex-husband's baby.

"My ex-husband has actually been quite lovely and remorseful, and just sweet considering the situation," Natalie confessed in a post shared Friday, in which she explains why her viral vitriol is focused on the babysitter. "Whereas she, the nanny, had been quite the opposite."

Natalie claims the woman regularly sends her vile messages, and has banned her from going to her old house to pick up her children or any personal belongings.

"She actually filed a police report against me at the beginning of all of this, because when I found out [about their affair] I went ape s** t. I lost myself, completely," Natalie said.

"I got a phone call from the police saying, 'Apparently, you were calling her a s**t and hurling abuse at her,'" she said. "And I was like, 'Yep! I did that. Not going to deny it, because she is a s**t.'"

The charges were eventually dropped.

Natalie wished her ex and the nanny would have been honest about their affinities for one another, rather than leaving her in the dark about their affair.

"At the end of the day, if they really love each other — they just had a baby together — then who am I to stop them from being together?" Natalie said. "The way that it was handled was just so wrong, and her attitude towards me is just so wrong."

"How can she possibly be that horrible towards me?," she questioned, assuring, however, that she is not "playing victim" for social media sympathy.

"I just wanted to explain why my videos are more angled towards her and not him."