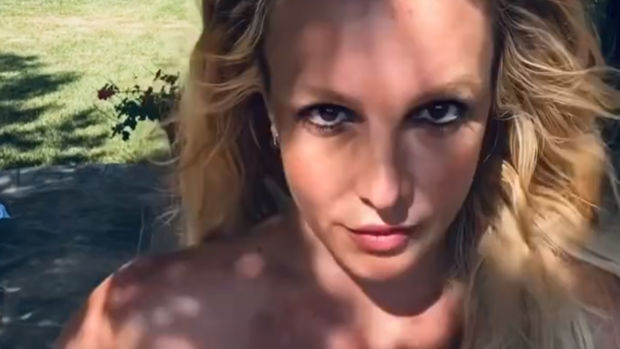 Britney Spears has shocked and "confused" her fans on Instagram after posting a topless video.

The short clip shows the 39-year-old star nude from the waist up, covering herself with her hands before moving closer to the camera in a rapid jump cut.

Some fans were said they felt "confused" by the post, while others wondered if Britney was really the one responsible for the Instagram video.

"I feel like these are being posted by someone else," one concerned fan wrote.

However many others said they viewed Britney's topless video as her trying to express her fight for freedom and praised the Piece Of Me star for the post.

"We hear you, we see you, we support you," a fan wrote in the comment section, while another added: "Act of rebellion act of freedom! Free Britney! Free your inner beast beauty."

The video – which had no explanation, only being captioned with kiss-lips emojis – comes after Britney admitted she's feeling "rebellious" and "spontaneous".

Britney - who is currently embroiled in a legal battle as she tries to have her father Jamie Spears removed as her co-conservator - has revealed how she's coping with the "change" in her life.

Alongside a video of herself painting an abstract piece of art, she wrote on Instagram: "As you guys know there’s a lot of change going on in my life at the moment and today I was feeling overwhelmed so I went to Michael’s and got white paper and paint!!!

"I wanted to see color and this is me messing around !!! Ok so I’m not a professional painter but I certainly felt like I was !!!

"This is an expression of how I’m feeling at the moment … rebellious… colorful… bright… bold … spontaneous… magical… so obviously showing my true colors!!!! (sic)"

Recently new court documents revealed the Toxic hitmaker is seeking to have Jason Rubin – who is a certified public accountant (CPA) – take over from Jamie as the co-conservator of her estate.

The documents, filed by Britney’s legal team, read: "Ms. Spears respectfully submits that the Court should appoint her nominee; in that, it is an objectively intelligent preference to nominate a highly qualified, professional fiduciary in this circumstance.

And the documents also request that Jason Rubin be given authority to manage Britney’s estate and real estate, as well as make health care decisions.

Her father is currently in charge of her estate and real estate, after he stepped down as her full-time conservator following health problems.

Jodi Montgomery handles Britney’s personal affairs including her health care choices, but under the proposed new plan, those decisions would be made by Jason.

Britney has been under conservatorship since 2008, and has been in court trying to regain her freedoms since June.