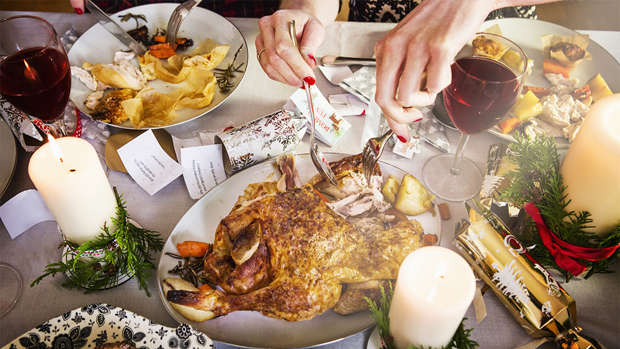 Christmas day can be expensive, especially if you are hosting a lunch or dinner for your whole family.

But does that make it OK to charge those attending money to help cover costs?

That’s the exact situation a Mumsnet user has found herself in and her question has left everyone rather divided.

User Staceyjas asked if she was being unreasonable to think you should ask the family to pay for their Christmas lunch – explaining how her partner’s mother is planning to charge £17 (NZ$32) per head for the holiday meal. 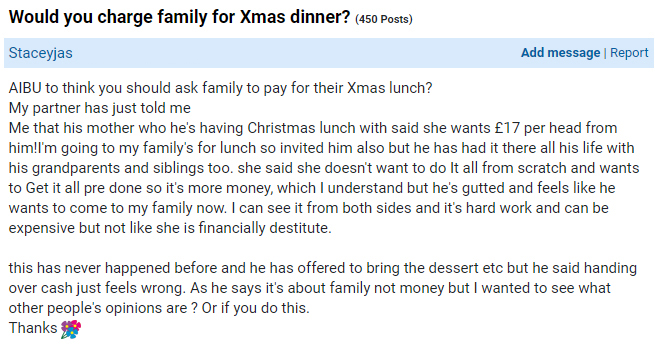 "She said she doesn't want to do it all from scratch and wants to get it all pre-done so it's more money," Staceyjas wrote.

"I can see it from both sides and its hard work and can be expensive but not like she is financially destitute."

Other Mumsnet users were quick to respond with differing opinions.

Some agreed with the idea of asking everyone to help cover the costs of a Christmas meal.

"It's really expensive to cater for Christmas dinner for a lot of people," user formerbaby wrote.

"If we do Christmas with my family, we will share the cost of food …

One user wrote: "If someone asked me for cash I'd pay - it's really expensive hosting, particularly at an expensive time of the year. When we have had Christmas meals as a big group of friends, we split the cost."

One noted that $32 wasn’t too much to ask for the meal.

"Based on how much Christmas costs us I’d say that was a good deal!"

However many others slammed the mother, saying it was wrong to ask for money for a Christmas meal.

"No! That is horrible," one wrote, "Cannot think of anything less hospitable than setting the menu and demanding your 'guests' pay for it."

"No," another added, "I would never ask people to pay to come to my house for dinner."

"If you can’t afford it, don’t invite people. Or only cook what you can afford. I’d never charge anyone, far less family, for dinner," another user wrote.

Some suggested that this could be the mother’s way of saying she didn’t really want to host Christmas lunches anymore.

However, some pointed out what it could be all about how you view the situation.

Several others agreed that they would feel more comfortable contributing food or drinks to the Christmas Day meal, rather than money.

"In our family, it's more normal that we all share out the cooking between us so contributions are split like that," another added.