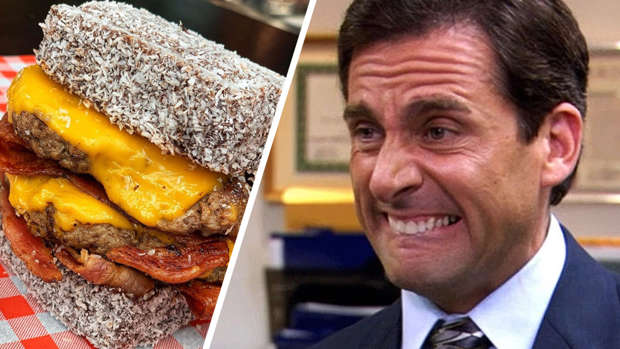 An Australian restaurant has pushed the boundaries of modern food and created a food mashup what is being described as a "red-hot disaster".

Adelaide's Chuck Wagon 175 has created a special burger for Australia Day, but the idea has divided food lovers.

The food mashup contains the juicy insides of a nice beef and bacon burger, but the buns have been replaced with ... chocolate lamingtons.

Taking to social media Chuck Wagon 175 said: "you know you love it".

"Alright, she's on! Australia Day is coming and we're rolling out the specials! Double beef, double bacon, double cheese between two Aussie lamingtons! Say what you want ... you know you love it! Available Australia Day week!"

While salty and sweet often complement one another, the lamington burger has left locals baffled.

"Are these cream-filled lamingtons or plain? Just trying to work out how many extra cholesterol tablets I'd need to take," one person said.

Another joked: "I don't know how drunk I'd need to be to eat one of these. But ill be past the point by 2pm on the day."

One wrote "you can't do this to bacon - it's just wrong" while another claimed it had "absolutely no structural integrity whatsoever, this would be a red-hot disaster to eat".

Despite the backlash, a number of fans came to the defence of Chuck Wagon 175, with a number claiming the food mashup is a great idea.

"100% better than Smith's lamington chips. We couldn't even give them away at work," one wrote.

Another said: "Australian equivalent of chicken and waffles!"

Australia Day is on Sunday, January 26.