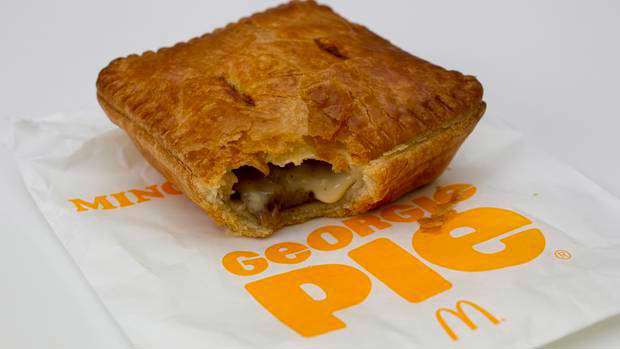 Iconic New Zealand fast food item Georgie Pie will be discontinued after McDonald's announced it will be ending the production of the Kiwi classic.

Georgie Pie was one of New Zealand's biggest fast-food stores from the time its first restaurant opened in Kelston, West Auckland, in 1977.

The Kiwi restaurant closed in 1998, before the bakery item relaunched seven years ago under McDonald's new menu items.

Now, Kiwis will have just a few weeks left to get their hands on a Georgie Pie before stock runs out.

"We know there will be disappointed Georgie Pie fans out there, and this is not a decision we have taken lightly," Dave Howse, McDonald's New Zealand's managing director said.

"As was the case in the 1980s and 1990s, from launch Georgie Pie has been more popular in the upper North Island, and the small Steak Mince n Cheese has made up the majority of sales.

"Over time a number of restaurants have stopped selling Georgie Pie due to lack of demand, and we've seen very limited pushback from customers."

McDonald's explained keeping Georgie Pie on their menu was "no longer viable", saying the baking process is lengthy and equipment would need "significant reinvestment to replace".

"Operationally, preparing Georgie Pies is very different to the rest of the McDonald's menu, especially in terms of how long they take to bake. We are looking at ways to reduce complexity for staff and are always looking at ways to keep our menu relevant to customer demand.

"We're now at a point where the oven equipment is at the end of its life and would require significant reinvestment to replace.

"Ultimately, we've had a number of factors come together, which mean we will be removing Georgie Pie from the menu."