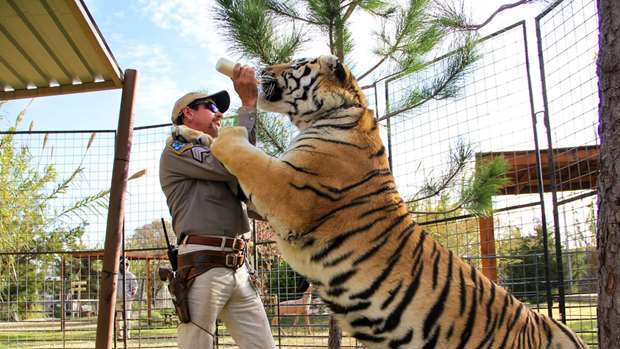 Rob Lowe is in talks to star in a Joe Exotic project with Ryan Murphy.

The 56-year-old actor and the 54-year-old screenwriter are discussing a scripted project based on Joseph Maldonado-Passage, aka Joe Exotic, the star of the Netflix series Tiger King: Murder, Mayhem and Madness.

Rob shared some pictures of himself dressed up as Joe on Instagram and wrote: "Rob Exotic. UPDATE: Ryan Murphy and I will be developing our version of this insane story. Stay tuned!"

Rob Exotic. UPDATE: Ryan Murphy and I will be developing our version of this insane story. Stay tuned!

And Deadline confirmed that the pair have had discussions about the project but stressed that it is in the "preliminary stages".

Rob is currently starring in the series 9-1-1: Lone Star, co-created and executive produced by Murphy.

Meanwhile, Tiger King has come back to Netflix for a one-off special.

In a video on Netflix's Twitter account, Joel said: "It's eye-opening and hopefully funny. So watch The Tiger King and I April 12 on Netflix."