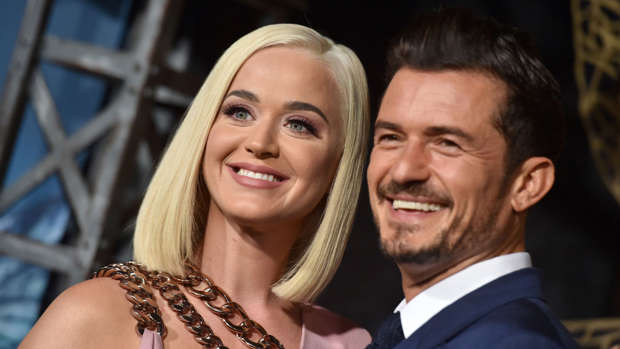 Katy Perry - who is set to welcome her first child with fiancé Orlando Bloom - has shared a hilarious update no her pregnancy.

The Roar hitmaker took to Instagram to share a sonogram of her unborn daughter and noticed something rather funny: her baby girl appeared to be pulling her middle finger at her mum.

"When your unborn daughter gives you a middle finger from the womb you know you’re in for it," Katy joked alongside the video of the unborn baby’s sonogram.

"Just like her mama,” Katy’s famous friend Rita Ora wrote in the comments of the clip.

Orlando also shared his own humorous video, from when they discovered their baby’s gender.

Meanwhile, Katy says self-isolation is helping her prepare the right "mindset" for parenthood.

She said: "This time has brought in a lot of balance, probably necessary balance. It's good for me to prep this kind of mindset, even after quarantine is done and everyone goes out and celebrates, I'll probably still be at home.

"Everyone is drinking during quarantine and I'm... not. Help me!"

And the 35-year-old star has developed a deeper bond with her family than ever before.

She told Entertainment Tonight: "That's the thing, it's interesting, there's a lot to think of but I have a lot of ways to be incredibly grateful and bond with my family on a deeper level than I ever have, rather than just a vacation or a holiday, there's a new foundation being laid within families, between partners, I think people that are quarantined together, we'll never forget this time."

And Katy thinks she's learned a lot about raising children from her family while in quarantine as she's been around a lot of kids of different ages.

I SEE NO DIFFERENCE! 🐘 Have you HERD? It’s the best night of the year - Disney Night/Mother’s Day, and we’ve got a whole trunkful of ❤️👶🏼 for you! I’ll be on Facebook Live at 6:30p ET (3:30p pacific) to answer all of your questions about #AmericanIdol, and then don’t forget to tune in to @abcnetwork at 7p/6p Central for an ele-phantastic #DisneySingalong and roll straight into the Top 7 reveal singing their favorite Disney songs and mom tributes 😩

She said: "I'm surrounded by many mothers, with my sister and my brother's wife and my mom, we've all been quarantining together for eight weeks.

"And we had my brother's nephew with us for seven weeks, and he's only eight months, and then I have a three-year-old and a six-year-old niece. And then Flynn, Orlando's son, who's basically a step-son, he's nine years old.

"So I'm getting the full range of ages and needs."