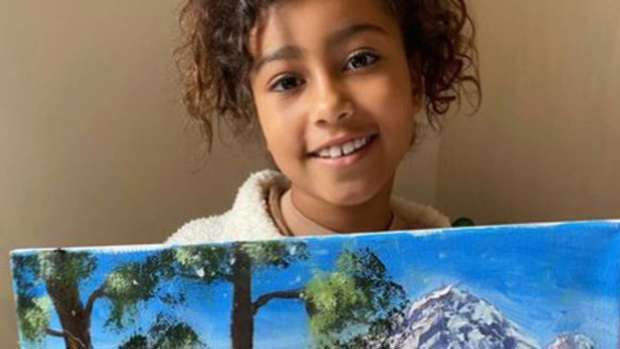 When Kim Kardashian proudly shared her 7-year-old daughter's artwork on the internet, she probably wasn't expecting such a wave of skepticism.

Social media users all over the world - every single one of them suddenly an art critic - took to their own platforms to express just how little they believed North West could have done that - mostly because, at 7-years-old, most of us were still struggling to properly hold the brushes.

However, the difference between 7-year-old North West and other 7-year-olds in the world is that most of them don't have filthy rich parents who can pay lavishly for private art tutoring.

Therein lies the crux of this issue. North is not your average 7-year-old, so can't be painted with the same brush (see what I did there?).

I will bet anything (even my life) that this painting was not done by north west pic.twitter.com/aaegkDJJKO

The alleged daughter of North's art teacher has come out on TikTok to categorically state that North had, indeed, painted the painting, once and for all settling one of the most heated internet arguments of 2021 (but okay, sure, it's only February).

TikTok user @camrynfred says her mum is North's art teacher and had also taught her how to paint that same painting, back in 2006, when she was also 7.

Apparently, her mum has been an art teacher for 30 years and this painting is one of the masterpieces she gets her young students to do.

i think she did actually! pic.twitter.com/lvoypDNmko

"My mum taught me how to paint this and she taught North how to paint the same one, just two weeks ago," she said. "She's been an art teacher for 30 years and everyone who comes to her classes starts with the exact same painting when they're starting out."

Kim K has also come out to defend herself and her daughter against the harsh criticism over the artwork debacle.

As the online roasting spread across social media, Kardashian hopped back on Instagram to blast her doubters, telling critics to "stop embarrassing yourselves" and warning: "DON'T PLAY WITH ME WHEN IT COMES TO MY CHILDREN!!!"

A close friend of North's is also taking part in the art class and her mother was quick to jump to the young artist's defence.

"Both girls are in art class together and learning oil painting techniques from an instructor," the friend's mother, Tracy Romulus, explained via Instagram. "They spend weeks at a time on a single painting and are incredibly proud of themselves once they complete a project."