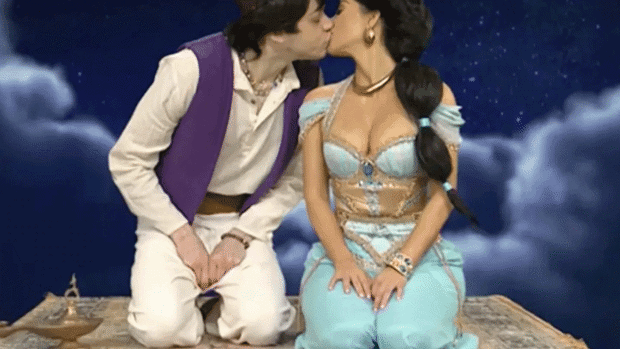 The 41-year-old star has been romantically linked to Pete, 27, over recent weeks, and an insider has revealed that she's been having "such an easy time" with the comedian.

The source told Us Weekly: "He makes her feel good and she's excited to see what happens."

Kim's inner circle is eager for the TV star to "have fun and be free".

The brunette beauty - who has North, 8, Saint, 5, Chicago, 3, and Psalm, 2, with Kanye West - is always left "smiling and excited" after hanging out with the Saturday Night Live star.

The insider added: "Everything flows well [when they're together]."

Kim is "single and having fun at the moment", according to another source. However, it's been suggested that "things could turn romantic" in the coming weeks.

Earlier this month, an insider claimed that Kim's friends have been urging her to "go for it" with Pete.

The Keeping Up With the Kardashians star has been encouraged to pursue Pete by her inner circle.

The source explained: "One of the first things Kim did was to get her family and friends' advice, and they all encouraged her to go for it.

"It's been very obvious for a while now that she's been missing some fun and laughter in her life, and of course Pete offers that in abundance."

However, Kim's friends are urging the star - who filed to divorce Kanye earlier this year - not to get "too carried away".

The insider said: "People are happy for Kim, but at the same time they're urging her not to get too carried away or ahead of herself.

"Pete has this heartbreaker reputation for a reason, and while his intentions might be honourable, there's a slight fear that Kim could be setting herself up for a vulnerable situation."