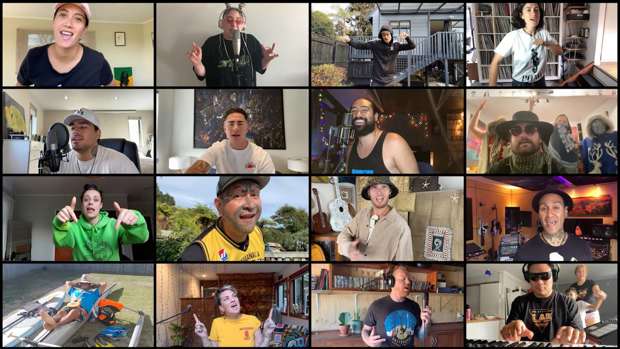 Stan Walker and Tiki Taane are among more than 20 Kiwi music stars who have formed a supergroup to record a Covid-19-busting tune from lockdown.

Made across just seven days by singers and musicians in their living rooms, garages and back yards, 'Stay' is a waiata - and accompanying video - urging Kiwis to stay home to save lives.

Released tomorrow, 100 per cent of the proceeds from the song and video is being donated to Music Helps, a charity that provides emergency help for Kiwi musicians facing hardship or illness and invests in music projects to help those in need.

The idea originated from Anaru Mill, the head of Manaaki, a Government aid fund that's part of the national Covid Command group.

After a string of conversations, Mikee Tucker from Loop, an Auckland-based company with a portfolio that includes a record label, got involved and enlisted some of our brightest stars.

A collaboration with Te Māngai Pāho, the Crown entity responsible for the promotion of Māori language and culture, it's designed to showcase how Kiwis can pull together in a time of crisis.

Shadbolt - lead vocalist and guitarist with L.A.B. who recently topped the chart with In The Air - helped arrange the song and said the opportunity the create a positive message was "inviting".

"Zoom's our best friend for this!" he said.

"We had one original meeting for the singers and songwriters over Zoom, and then voila."

Once the song was written, a demo was sent to everyone. The singers recorded their own parts and sent the audio to producers who crafted the final version over three days.

"We went from that phone call to a completed song all in one week," Shadbolt said.

He hopes it will encourage Kiwis by example.

"With the status of all these musicians, hopefully, people will see that and say, oh if they're staying home so must I."

Stay will be available via Apple Music and Spotify. Loop hopes people will share the track - and video - to circulate and reinforce the stay-at-home message.