Kiwi entertainer How to Dad has caused a stir online, after sharing a seemingly innocent picture of how he organises his cutlery drawer.

How to Dad shared his method of "knives, forks, spoons", adding that if others don't sort theirs the same "then you need to go".

Naturally, this fuelled some passionate replies from social media fans, some sharing their horror at the thought of not starting with forks on the left, followed by knives and spoons on the right. 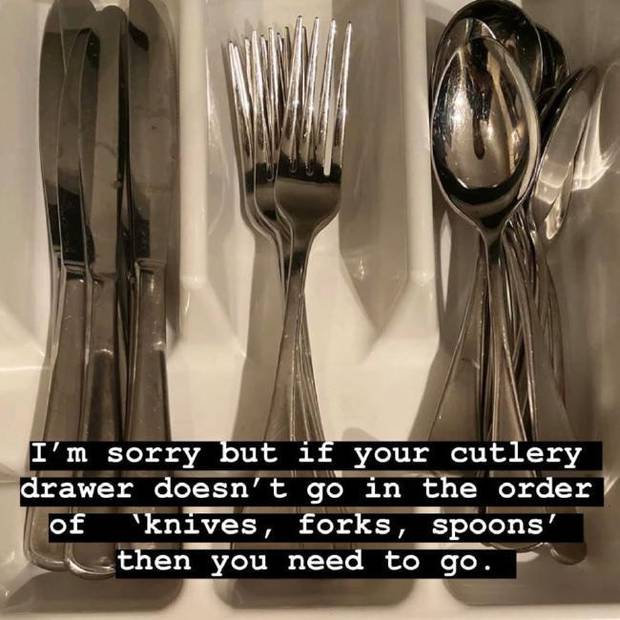 One angry fan replied: "Why would you put the knives on the left in the drawer when at the table you hold your knife with your RIGHT hand?"

Another commented: "Put the knife and fork in the drawer as you would lay them on the table ... then spoons go to the side. Honestly, I despair for mankind. I had no idea so many people were getting this simple concept so wrong!"

Others felt spoons should go in the middle of forks and knives. However, one passionate cutlery fan argued only a "psychopath" would do that.

"This is all wrong, it's messing with my head," they wrote. "It's forks, spoons, then knives."

Order your SOCIAL DISTANCER 3000 today! Only 12 easy payments of 99.95! Batteries not included, warranty not included, conspiracy tinfoil hat is an extra $19.95, all assembly required. No money-back guarantee. Or, stop listening to random Facebook advice and listen to the scientist/doctor folk instead- it’s what they do. 👍🏼 #commonsense #sharpenup #socialdistancer3000 #covıd19 #wegotthis #howtodadnz

So what is the right way to do it? According to kitchen showroom designer Elain Maytom there are "no hard and fast rules".

The expert said most people arrange their cutlery in the order they put it out on the table – forks on the left, knives in the middle and spoons on the right.

"It always makes sense to have the handles facing out and nearest to you, so that's what you grab hold of when taking them out," she told Home Beautiful.

The post seems to have inspired fellow lockdowners, who have turned to showing off their newly arranged cutlery drawers on social media.

"What did you do today...? Sorted my cutlery drawer," one person wrote on Twitter.

What did you do today...? Sorted my cutlery drawer! #adulting #mumlife #lockdown pic.twitter.com/UkXbrbgRWc