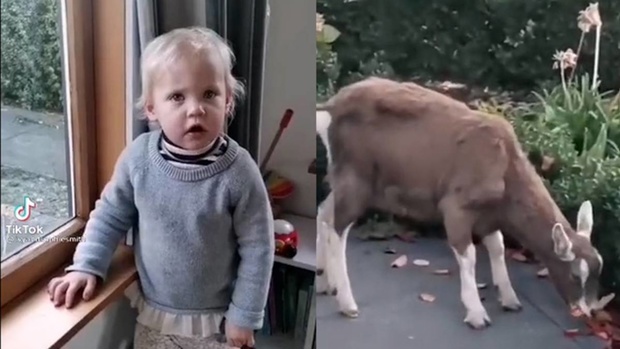 A Kiwi toddler's foul-mouthed response to a visiting goat has gone viral, despite her mother's insistence that the animal was "just a goat".

Christchurch mum Sophie Smith was at home with 2-year-old daughter Ivy when the intruder appeared.

She used her cellphone to record the scene as she exclaimed: "It's a f***ing goat!"

Not missing a beat, her daughter copied her and said: "A f***ing goat's outside".

Attempting a correction, Sophie replied: "It's just a goat," but Ivy was convinced.

Smith told Stuff that she initially shared the clip on other social media before being urged to send it more widely, so she uploaded it to TikTok.

The cheeky clip found its home on the platform, which specialises in short clips, and soon racked up more than five million views.

Smith said she was stunned by the response.

"I've had a lot of really positive comments from people who have said that it's just made their day and all they needed was a laugh, and that they're really appreciative that I shared it ... and then I've also had quite a few hate comments of people saying really negative things," she told Stuff.

Much of the criticism came from other mums, critical of Smith swearing in front of her children.

Smith defended herself, saying: "There's been a lot more good that has come out of this than bad, and going forth she is not using this language on a daily basis.

"If anybody says that they've never sworn before ... have a goat come into your property and then tell me otherwise."

She told TVNZ there has also been plenty of positive reactions, with people saying it "made their week" and vowing to watch the clip whenever they needed to be cheered up.