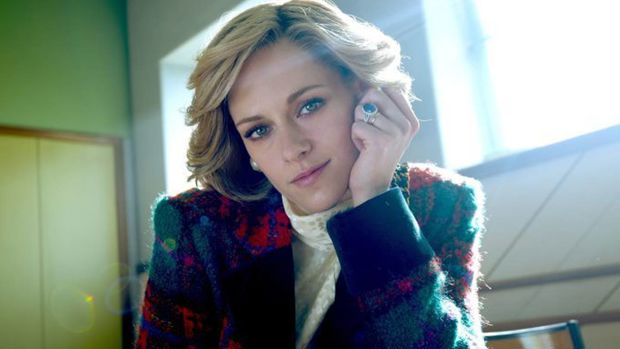 A new photo of Kristen Stewart as Princess Diana has been released showing the actress showing off the late royal's famous engagement ring.

A dazzling close up of the Twilight star shows her gazing into the camera wearing Diana's signature pearl earrings and her engagement ring.

Deadline reports Spencer is currently filming in Germany, before moving to the UK. As well as the new image, new cast members have been revealed. Jack Farthing (Poldark) will play Prince Charles. Sally Hawkins, Timothy Spall, and Sean Harris have also been cast to star in the film, according to Deadline.

The movie will follow one weekend in the life of Diana, during a Christmas time at the royal family's Sandringham estate when she decides to leave Charles.

It is expected to be released in the second half of 2021.

Stewart was revealed in June last year to have nabbed the starring role, depicting Diana in the later years of her life. Despite a lot of favourable reaction online, the decision to cast Stewart initially attracted backlash.

The movie's director, Chilean filmmaker Pablo Larraín, defended his decision to cast the American actress in the role, telling Deadline: "Kristin is one of the greatest actors around today."

He added: "Kristen can be many things, and she can be very mysterious and very fragile and ultimately very strong as well, which is what we need." "The combination of those elements made me think of her. The way she responded to the script and how she is approaching the character, it's very beautiful to see. I think she's going to do something stunning and intriguing at the same time."

Last year Stewart admitted she was nervous about taking on the role and especially mastering the late princess' accent.

In an interview with InStyle, the actress gushed that she hasn't been "this excited about playing a part, by the way, in so long".

She added: "It's one of the saddest stories to exist ever, and I don't want to just play Diana – I want to know her implicitly."