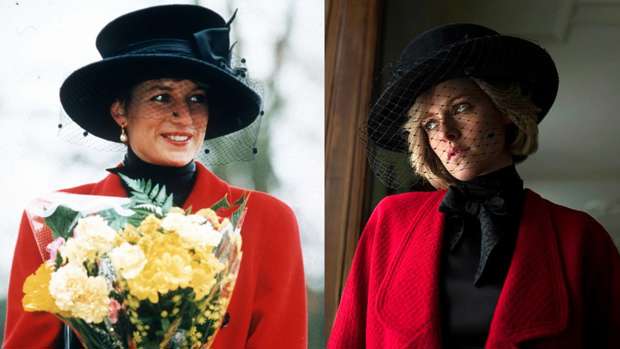 The first official picture of Kristen Stewart as Princess Diana has emerged, and the resemblance between the two drastically different women is uncanny.

Stewart, who plays Diana in the upcoming film Spencer, was revealed in June last year to have nabbed the starring role, depicting Diana in the later years of her life.

The film starring the Twilight actress showcases the late royal in a "critical" weekend in the early 1990s when Diana decided that her marriage to Prince Charles wasn't working.

While the announcement of Stewart playing Diana was met with initial fury online, the released image of Stewart as Diana is no doubt set to blow away critics.

Twitter was initially swarmed with questions and comments, with users writing: "What could possibly go wrong?"

"Couldn't you have found a British actress? Plenty of British actresses who would have been better for this role, Princess Diana was classy, Kristen is not."

However, Stewart looks every bit the royal in a red ensemble with a black hat and mesh veil. The actress even mastered Diana's iconic head tilt and gaze. Chilean filmmaker Pablo Larraín defended his decision to cast the American actress in the role, telling Deadline: "Kristin is one of the greatest actors around today."

He added: "Kristen can be many things, and she can be very mysterious and very fragile an ultimately very strong as well, which is what we need."

"The combination of those elements made me think of her. The way she responded to the script and how she is approaching the character, it's very beautiful to see. I think she's going to do something stunning and intriguing at the same time."

Last year Stewart admitted she was nervous about taking on the role and especially mastering the late princess' accent. In a new interview with InStyle, the actress gushed that she hasn't been "this excited about playing a part, by the way, in so long".

Stewart also revealed that she has been working hard on her research before filming begins: "In terms of research, I've gotten through two and a half biographies, and I'm finishing all the material before I actually go make the movie...

"It's one of the saddest stories to exist ever, and I don't want to just play Diana – I want to know her implicitly."