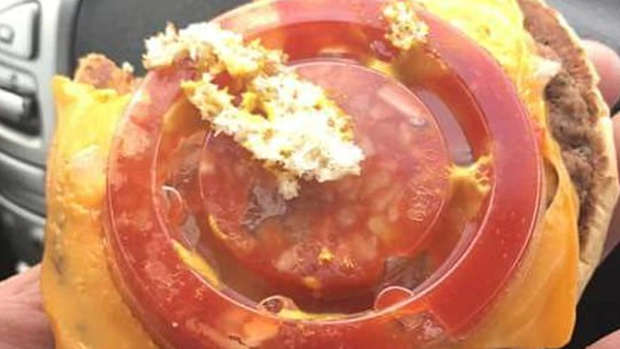 You may have heard about fast food workers spitting into food when they don't like a customer - but this story is perhaps even worse.

One man claims he found a circular plastic lid in his burger instead of a tomato in a worrying post on Reddit.

His photo of the lid appears to be covered in tomato ketchup, and slightly resembles the fruit from far away, reports the Daily Mail.

But on closer inspection, it is all too obvious that some cheeky - or dozy - workers have mistaken the lid for a tomato.

The man had just taken a bite out of his cheeseburger meal when he noticed that something wasn't quite right.

And when he took off the top burger bun, it revealed that inside was a tomato ketchup-doused plastic lid.

The man took a picture of his surprising discovery and uploaded it to Reddit under the username sugarcain, where it quickly went viral with more than 2,000 upvotes.

The lid appears to be one which normally fits onto disposable coffee cups. It is not known how it came to be smothered in ketchup, nor where the man bought his burger from.

Reddit users found the unwanted extra both hilarious and worrying.

One joked: "Does this mean somewhere in the world there's a drink with a tomato on top?" Another said that it looked like a "perfectly delicious tomato".

However several users suspected the picture might have been faked.

But it wouldn't be the first time something disgusting has accidentally ended up in someone's food.