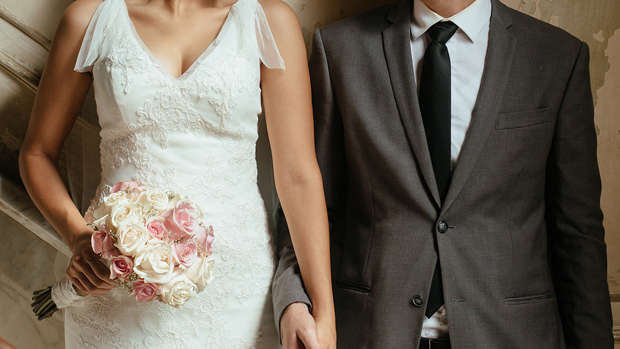 A man who kept is "micropenis" a secret from his new bride right up until their honeymoon is now threatening to bring legal action against her after she shared her "surprising" experience on the internet.

In her anonymous Reddit post, the woman revealed that her husband hid his bedroom secret from her until after they were wed by claiming that he was "old fashioned" and didn’t want them to have sex before marriage.

However, when the night to consummate their nuptials came, the newlywed was left shocked and "surprised" that he had been keeping such a big secret from her.

"Am I the a**hole being upset that I waited until my wedding night to find out that he probably isn't as 'old fashioned' as he says he is?" the distraught woman vented on Reddit.

"I kind of feel lied to.

"Like a half-truth … or something was intentionally withheld from me." 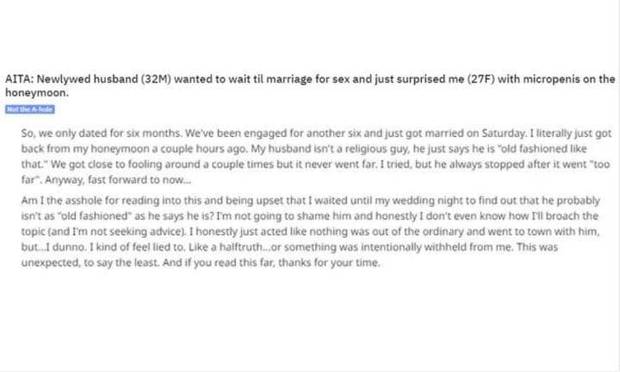 The 27-year-old later revealed that she had eventually broached the awkward subject with her husband.

"He said he was sure I would leave him if I knew about the size prior to the wedding," she said in an update on Reddit.

"He wanted to talk before the wedding but feared it being called off because of his micropenis and said if both families found out/gossiped about it he would be crushed."

But in an awful twist, the woman revealed that her husband is now threatening to divorce and sue her after he discovered the post she had written about his intimate secret.

The woman said: "My husband saw my post and says he wants to leave me and sue me.

"Says he wants an annulment and is considering suing me for defamation of character.

"He says it's only a matter of time before someone leaks his name."

The woman explained that her husband found the post through an old friend who put two and two together as he knew the man’s secret and realised he had just gotten married.

Now the woman says she feels horrible about the whole situation.

"He doesn't know who else the guy has told to link him to it. I feel like I am the a**ehole.

"He is crushed that I posted about him."