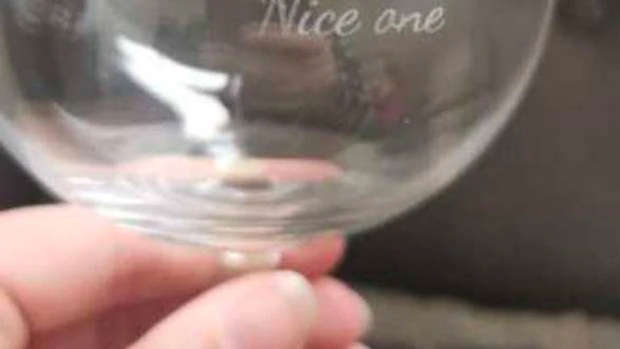 It was intended as a romantic gesture to mark his girlfriend's 30th birthday ... but ended as an "engrave" error of judgment.

Her partner Daniel Varey was determined to make it special - so he ordered her something memorable to mark the occasion, a personalised gin glass.

But that's where things started to go horribly wrong.

"At the end of the order on the website it said add a note. So I put ... 'Can we have it delivered before Monday if possible as that's her 30th. Nice one'." 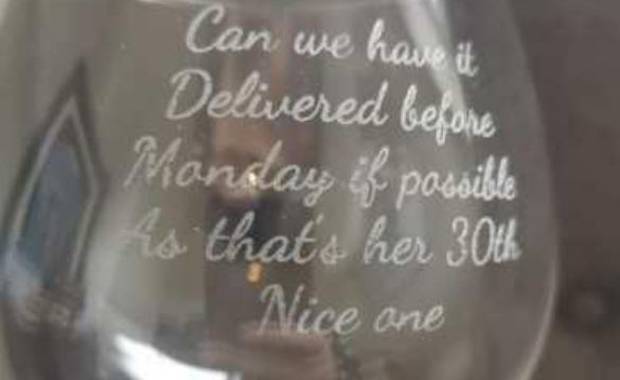 But when Woodward opened her personalised gift, what she read on the glass was something she wasn't expecting.

"Anyway, she opened it today and that's what got engraved on the f**king glass, Daniel said.

Varey had mixed up the inscription box with the message for the delivery driver.

Instead, Varey had wanted it to say: "Happy 30th birthday princess. Love you millions."

"I had a feeling I did something wrong because I'm so dopey," Varey said.

The couple saw the funny side, with Woodward adding: "It would only happen to us."

Woodward and Varey's friends to social media to poke fun at the couple, with some revealing they're not surprised.

"Only you Daniel only you, I know you said you had a few surprises when we were texting on sat night , but f**k me I didn't see this one coming," one friend wrote.

Another said: "At least Hayley will always remember her birthday now."

At least it can only get better from here for Varey.