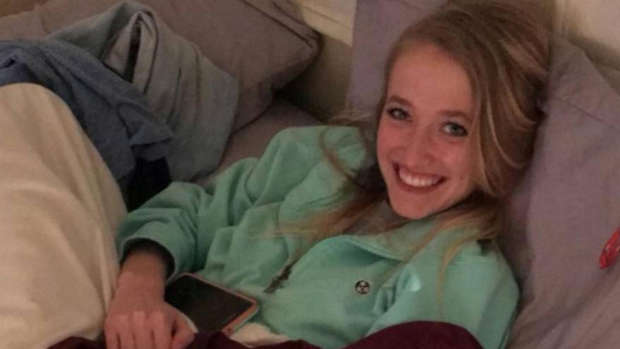 A man in the US couldn't resist including his girlfriend in the photo of a shirt to send to his mum - sadly, he inadvertently revealed far more about the relationship than he wanted to.

Maison Vallance, 22, innocently posted the photo to Twitter of his girlfriend posing in bed with the shirt his mum had bought him.

"I took this picture to let my Momma know I found the shirt she got me, but Meghan is too pretty not to post It," he added as a caption.

I took this picture to let my Momma know I found the shirt she got me, but Meghan is too pretty not to post I️t. pic.twitter.com/TpHsKr1qGx

The photo quickly went viral with people pointing out the hilariously embarrassing item that could also be seen in the shot.

Once Twitter users pointed it out, Vallance quickly acknowledged what he'd done.

Ok just realized I sent this to my mom with THE ROPES ATTACHED TO MY HEADBOARD..... https://t.co/qpCdMKawjx

Luckily for him, both his mother and his girlfriend seem to have a good sense of humour.

The man told Indy100 his mum found it "hilarious" and his girlfriend was "embarrassed at first but then embraced it".