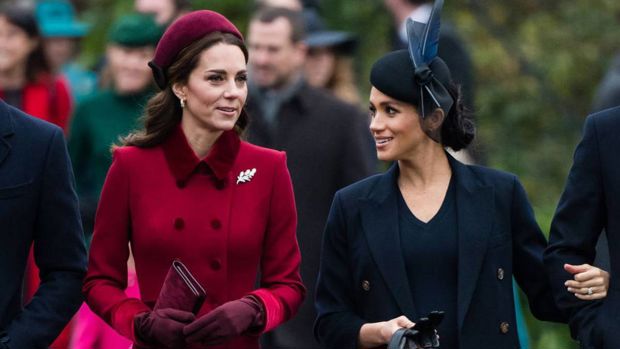 Meghan Markle and Prince Harry are said to have surprised Kate Middleton with "thoughtful gifts" on her 39th birthday.

Sources say Kate received a special parcel from across the pond from the Sussexes and their son Archie, reports The Sun.

Harry and Meghan, now based in California, are said to have included a thoughtful card alongside several gifts to their sister-in-law.

A source told US Weekly it was "a nice surprise" for the Duchess of Cambridge.

"Kate wasn't expecting anything from the couple."

The outlet also claimed Kate was "showered with gifts" by husband William, including a pair of diamond earrings.

It's a strong contrast to Kate's birthday last year, which was "ruined" by Harry and Meghan's announcement they were stepping down from their senior royal roles.

Royal writer Phil Dampier said her special day was undoubtedly wrecked by the Megxit news, telling The Sun: "Apart from anything else, Harry and Meghan's announcement has overshadowed Kate's 38th birthday."

The Duchess of Cambridge celebrated her 39th birthday on January 9 in style - with a nice hot cuppa.

Instead of marking the occasion with a weekend house party with friends at her country home of Anmer Hall like every other year, Kate is said to have spent a "quiet birthday" having a tea party organised by William and their three children, George, Charlotte and Louis.

The Queen, Charles and Camilla all offered birthday wishes to Kate on their social media.

Charles and Camilla shared another snap of the mum-of-three, writing: "Happy Birthday to the Duchess of Cambridge!"

Kate normally celebrates on the weekend closest to her birthday by throwing a shooting party and hosting her closest friends and family, including her parents, Carole and Michael.

Last year, William and Kate welcomed guests to a weekend-long celebration including a Sunday morning church outing with the Queen at St Mary Magdalene Church.

The Cambridges thanked friends and family for their birthday wishes in a following post on Instagram, acknowledging that it's a rough time of year for those celebrating their birthdays in England, which has gone back into lockdown for the third time.

"Thank you for your kind wishes on The Duchess' birthday," they wrote on the Kensington Royal account.