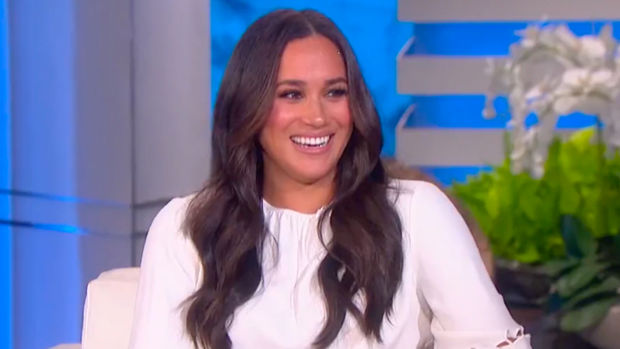 The Duchess of Sussex will appear on the Ellen Show, and a teaser trailer reveals what the pair will discuss.

The interview marks Meghan's first major television interview appearance since she and Prince Harry sat down with Oprah Winfrey in March 2021.

In a short clip released ahead of the full interview airing, Meghan speaks about her acting days.

"Lili's now teething," she tells Ellen, who also happens to be a neighbour to her and the Duke of Sussex in Montecito, California.

She spoke with Ellen about how a lot has changed since her last talk show appearance. She used to be on the lot where The Ellen Show is filmed on a regular basis during her acting days, and the former Suits star shared anecdotes from her audition days.

"I would park on gate three and I would scoot on over and the security guards here would always say 'break a leg, I hope you get it'. So driving today was very different," she said.

Speaking about her car at the time, she said:

"It had a life of its own so I had this very old Ford Explorer Sport and at a certain point the key stopped working on the driver's side, so you couldn't get yourself in through the door so after auditions, I would park at the back of the parking lot and I would open the trunk and climb in, pull the door shut behind me and crawl all over my seats to get out. That's how I would come to and fro."

When asked if anyone said anything about her strange behaviour, Markle said she had an explanation ready to go.

"No I would play it off, I'd go "Oh, I'm just looking for my resume, highlighters for my script. Maybe it's back there", and then crawl in and close it."

"The things we do," she laughed.