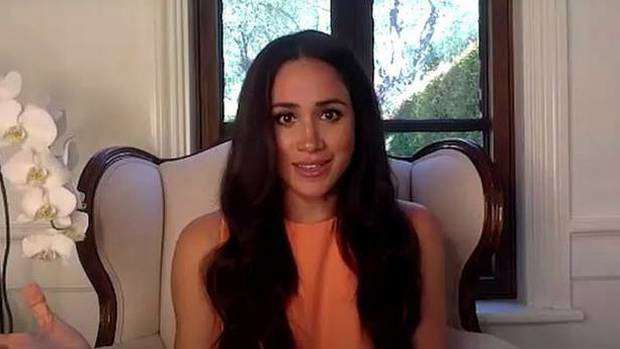 The Duchess of Sussex has admitted she's "so glad to be home”.

The former Suits actress - who was known as Meghan Markle before tying the knot with Britain's Prince Harry in 2018 - joined activist Gloria Steinem for a socially-distanced backyard chat where she was joined by her pet pooches, Guy and Pula.

And Meghan told Gloria in a preview clip of their conversation that she couldn’t be happier to be living back in her native North America “for so many reasons" after moving to Santa Barbara with her husband, The Duke of Sussex, and their 15-month-old son Archie.

discuss representation, why each vote matters and how all women “are linked, not ranked." MAKERS has an exclusive look at that historic backyard chat! 🙌 Q&A to come tomorrow.

Gloria said: "I'm so glad that you're home."

To which Meghan replied: "Thank you. Me too, for so many reasons."

The pair got together to highlight the importance of voting.

Meghan, 39, said: "People forget how hard women like you and so many others before you fought for us to just be where we are right now."

And Gloria responded: "If you don't vote, you don't exist.

Since Meghan, The Duchess of Sussex became friends with Gloria Steinem, they've spoken of their shared beliefs surrounding women’s rights, the need for representation and the very timely conversation on voting. Read their exclusive Q&A on MAKERS today, #WomensEqualityDay at the link in bio!

"It is the only place we're all equal, the voting booth."

She continued: "What worries me the most are young people, who I understand are the least likely to vote, and I can understand the feeling that they don't think they have an impact.

The pair's discussion comes after Meghan took part in Michelle Obama's 'When We All Vote' virtual event.

The mother-of-one urged women in the US to vote in the upcoming presidential election.

Meghan, The Duchess of Sussex and @GloriaSteinem discuss representation, why each vote matters and how all women “are linked, not ranked." MAKERS has an exclusive look at that historic backyard chat! 🙌 Q&A to come tomorrow! https://t.co/e0WY2hjTju pic.twitter.com/AExOmNdWIb

Meghan called on female voters to make a "change" by going to the polls later this year and warned they would be "complicit" if they didn't exercise their democratic right.

She said: "When I think about voting and why this is so exceptionally important for all of us, I would frame it as, we vote to honour those who came before us and to protect those who will come after us.

"Because that's what community is all about and that's specifically what this election is all about.

"We're only 75 days away from election day and that is so very close, and yet there's so much work to be done in that amount of time, because we all know what's at stake this year.

"I know it, I think all of you certainly know if you're here on this fun event with us, then you're just as mobilised and energised to see the change that we all need and deserve."

In the UK, although the royal family all have the right to vote, Parliament guidelines state it is considered unconstitutional for the monarch or their family to vote in an election.