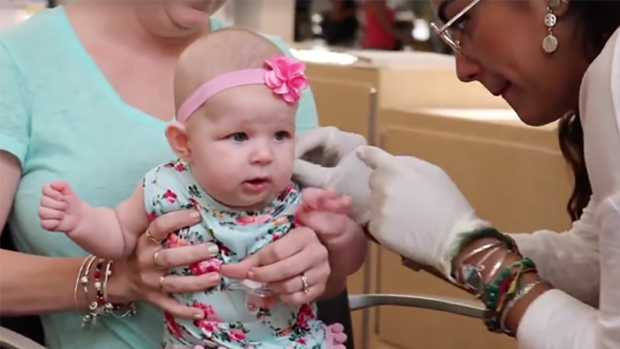 A mother has sparked controversy after sharing a video of her baby’s ears being pierced, with some even regarding it as "child abuse."

In the short clip, which is believed to have been filmed in the US, the mother can be seen holding her baby as the salon worker attempts to place marker dots on her ears.

While the baby seems at ease at first, she becomes increasingly distressed as the procedure takes place.

Social media users are outraged over the clip, with more than 3.6 million views and 12,000 comments.

“Barbaric! Why would anyone do this to a baby?” one person wrote.

“If they aren’t old enough to consent and ask to get them pierced then they shouldn’t be getting pierced,” added another.

“OMG!!! This makes me soooo angry!!” a third commented. “Why would anyone do this to their baby???? Let THEM decide when and IF they want to do this to their bodies! This should be outlawed. I mean you wouldn’t take a baby for a tattoo would you?!?!”

Another added, “All done for the sake of the parents, should be an age limit to stop this from happening.”

While the responses were overwhelmingly negative, there were some users that jumped to the mother’s defense.

One person said, “This isn't even a f****** big deal people get over yourself she's not torturing the baby.

“If she doesn't want it when she's older she can take them out.”

Another parent pointed out that ear piercings are actually part of some cultures.

“In my country people ask when are you going to have your baby’s ear pierced? And suggest, sooner the better!! Will be less painful when she is still a baby, etc. And we even have a special day in a year to have ear or nose pierced. My ear and nose was pierced when I was a baby and I had my baby girl pierced when she 25 days old," one user explained.

A petition has now be filed calling for ear piercing on babies to be banned.

“It is a form of child cruelty,” the petition reads.

“Severe pain and fear is inflicted upon infants unnecessarily. It serves no purpose other than to satisfy the parent's vanity.”